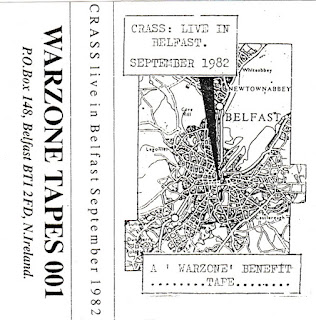 Most English groups were shit scared to play in Northern Ireland during 'The Troubles'.....a fine example of Irish understatement  was 'The Troubles'.I doubt the IRA had too high an opinion of Anarchy, them being a Marxist organisation an' all.
English groups especially had a very basic understanding of the situation in Ulster,the best example of this has to be Sham 69's obscure reference to these problems in their sing-a-long anthem,"Ulster",which patronisingly informed the northern Irish that they were all 'Losers' if they didn't stop being nasty to each other.
The closest Crass get to that is "Fight War Not Wars",which has more of a general 'peace' vibe to it rather than being condecended to by a stage school cockney. I dunno if Steve Ignorant ever went to Stage school,but it wouldn't surprise me.Someone in Crass had to play the part of the Cockney oik among the other blatantly posh anarcho trust fund punks.
Chumbawumba anyone?

1 So What
2 Don't Tell Me You Care
3 Shaved Women
4 Nagasaki Nightmare
5 Mother
6 Beg Your Pardon
7 Contaminational Power
8 Major General Despair
9 Fight War Not Wars
10 Do They Owe Us A Living?
11 What the Fuck
12 Banned from The Roxy
13 G's Song
14 Securicor
15 How Does It Feel
16 Big A little a
17 Reality Whitewash
18 Nineteen Eighty Bore
19 Mother Love
20 Rival Tribal Revel Rebel
21 You've Got Big Hands
22 Poison In A pretty Pill
23 Darling.

DOWNLOAD without any troubles HERE!
Posted by Jonny Zchivago at 00:24

I'm detecting a hint of animosity towards Crass, that's fine but to me they were teachers and also opened my eyes to reality. I'm behind you on the Sham thing, every time I see or hear Pursey I cringe. He really did do it for the kids didn't he, poncing off to swan around in a tutu. That's more punk than Crass ever were (according to him), there I've just told you the truth. I'm here all week

Haha...in a way poncing off to do some contemporary dance is more Punk than thou. Anything that fucked the Punx off was ok with me....BUT....making yourself a laughing stock like that night i saw Pursey on BBC2 art show riverside, when Billy Connelly asked him "What the fuck was that?" as he left the arena, is misunderstanding what moving in right angles means.Priceless.
I still enjoy singing along to Sham 69 however, especially that silly Punk concept album they did..."That's Life"....very funny stuff...unintentionally so....yeah Crass are alright really, i did volunteer for ALF postive action after getting a contact address from the booklet in 'Christ The Album'.....its the dogma preaching,and the uniform that turned me off them.

ps Crass and me say ...Save the Pangolin http://savepangolins.org/

That would be a good Crass tribute band name...CRAPS?
Penny Rimbaud could spell Crap, 'cus he was undoubtedly privately educated. So surprisingly their actual name was indeed Crass!?

Sorry, another old post. Anyways, speaking of ALF--do you have that Artist for Animals--Abuse EP? Pretty good: Wyatt's Pigs, Style Council, Ralph Steadman (weirdly reminding me of Durutti Column), Attrition. If not, I've got it on vinyl, but I could send it in a while.