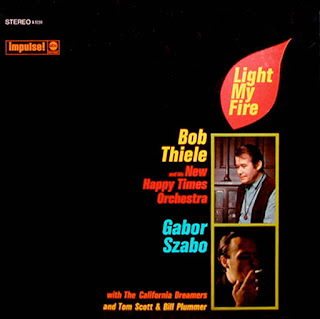 As previously described in the Bill Plummer post, I discovered several impulse Jazz Psychsploitation albums in a crate at Camden market in the nineties. I wisely purchased the classic Bill Plummer and the Cosmic Brotherhood album,and returned the next week to buy the rest. One of which had Bill Plummer twanging his Sitar again as part of Bob Thiele's marvellously monikered 'New happy Times Orchestra', along with Hungarian refugee guitarist Gabor Szabo,and Tom 'Starsky and Hutch' Scott on lead sax.
Thiele had produced some of the legendary jazz greats on the Impulse label including both Coltranes, among many others.
Somehow, here he lost his mojo, and produced some kind of James Last album for aging Beatniks who still wanted to get down with the kids but forgot how.
It has its funny moments,however unintensional, like the flaccid version of 'Light My Fire' which manages to extinguish any flame the original may have had.
"Rainy Day Women #12 & 35" is transformed into something akin to Ray Conniff or the Mike Sammes singers;the kind of stuff one would hear on the UK Testcard transmissions of the seventies.
Everytime I hear Bill Plummers inappropriate Sitar twanging, duelling with Szabo's appalling Jazz Guitar,while demolishing several sixties Psychedelic classics, never fails to raise a snigger from my larynx.I'll give it that....it certainly does make one Happy,but not in the way Bob and the boys intended.

DOWNLOAD some happier times for you HERE!
Posted by Jonny Zchivago at 10:17

Its funny you should write that you hate jazzguitar, but you make an exception for Szabo's shitty playing - or something like that. Yeah never really warmed up to electric guitars in jazz, and I can't stand any of the virtuosos. Huge fan of most anything Sonny Sharrock ever contributed to though, but he wasn't really conventionally "good" at his playing either. "I just play a fucked-up horn" is obviously the best approach.

I make an exception for Szabo only because he fits in the jigsaw puzzle of why these extraordinarily terrible but good albums were made,and released on one of the greatest labels ever. He's got a good image too, which ,as i'm quite superficial, is important for me.
Any guitars in jazz before the John Zorn/no wave era was a strict no no in my book....but theres no rules, it just sounded shite was the problem.Fred Frith and the likes are jazz in my silly little book.