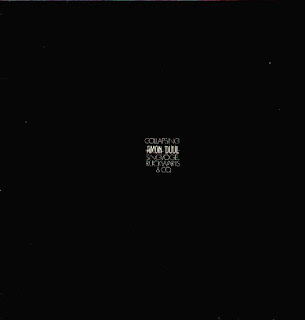 How more black can an album be,and the answer is 'None...None more ....black!'

'More recordings from the 1969 "Psychedelic Underground" sessions. A more diverse second album, a number of the tracks involve multi-tracking, and there are lots of sound effects, cuts/splices/cross-fades, etc. As with its predecessor, all glitches and errors are intentional.

I couldn't be arsed to write anything vaguely witty,so the first paragraph was lifted from Discogs,but Amon Duul 1 seems to have elicited a wordy response from the general public(you!),specifically on the subject of what, and what is not, 'Krautrock'.Basically Krautrock is Prog Rock,and Space Rock played by Germans;But Amon Dull..er sorry...Düül, certainly is not progressive rock,but displys an independant spirit that German musik between 1968 and 1974 had in buckets.Basically, they hadn't a cat in hells chance of getting a hit record in the UK/US charts, so they had a freedom to do whatever they wanted themselves,resulting in some pretty unique takes on progressive rock and space Rock. In their attempts to break the shackles of Anglo-American rock they mostly seemed to have a strong desire to be Pink Floyd...and why not? A few groups stood out as being glaringly unique, such as Can, Neu,and Kluster,but the rest could be compared to a lot of anglo-american equivalents. Amon Düül were like any number of Hippie commune collectives across the western world. Compared to the Can's of this vague genre, Amon Düül one were patently awful, but thats kinda what I like about 'em innit?

DOWNLOAD this load of kollaps HERE!
Posted by Jonny Zchivago at 08:37

I agree with the pink floyd comparison...my first thought when I started the foray into krautrock....the first can record sounded very velvet underground when I first heard it. It was impossible to find can or any krock in the us at the time...I found my copy of Monster Movie waaaaaaay in the back of a cd rack in a little music store somewhere in germany....Lydon sounds a bit a. Duul to me

It took me a while to get into the first Amon Düül but now I like them better than the later proggy efforts of their more musically competent brethren. Their freaked out communal jams somehow make great background music in today's world. For any Düül or Düül II fans who haven't heard them, Kalacakra's "Crawling to Lhasa" and Sand's "Golem" are also well worth checking out.

Kevinesse: yeah VU but with guys who could play instruments....except for Irmin Schmidt,who might as well have not been in the group as far as I can see?The teutonic Rick Wright.Another in the long list of extraneous band members: Bez, Paul Ferguson,The Mascara Snake, Chas Smash, Sid Vicious,....er...Irmin Schmidt etc.
Indeed,Lydon was a sponge for all thing Prog,no doubt Amon Duul2 is in there, and Amon Duul 1 = Flowers Of Romance.

Responding to your response.. I should clarify that I actually think AD2 were by far the better group, but only on their first 2 albums. Yeti was so good that if it had been the only LP they'd ever recorded it would still stand up as an all time underground classic. Tanz der Lemminge is also pretty good for its outright weirdness but by then they were starting to stray into prog ambitions. Their pompous nadir imo was their attempted opus "Made in Germany", with unfunny (not offensive, just dumbshit) Hitler jokes which reportedly had Ahmet Ertegun rolling his eyes at their pretentiousness at wanting to conquer America. There is a video on youtube, though, of AD2 performing the non-album single "Between the Eyes" live which shows them at their best during that transitional period. The drummer resembles a cooler version of Thurston Moore and he's thumping a kit the exact color of Ballentine Ale cans that I wish I had. That was right before Tanz der Lemminge I believe..