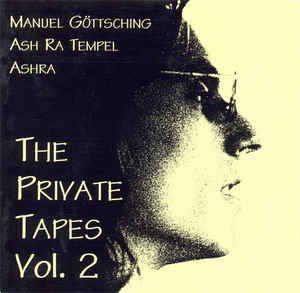 Manuel Göttsching is often credited with inventing 'House'(shame on you!), with the mind numbingly boring "E2-E4" album.Its repetative synth lines were hardly original,and the terrible drum machine in the background wasn't either;but that LP and "Trans-europe Express" seem to put this mind-controling genre firmly in the land that gave us MK Ultra.Maybe Göttsching was a fourth Reich Nazi drone,programed to infiltrate the counter-culture and stealthily introduce this form of fake decadant marching musick to the masses...very sucessfully I may add.
Personally,I place the blame at the feet of the minimal composers of the sixties and seventies,Glass, Reich, Riley etc, plus Kraftwerk...maybe?
The first three tracks on volume two wouldn't be out of place at some drugged up chill-out area at a late eighties illegal rave party somewhere near Basildon (Essex?)
For me, the live Ash Ra Tempel track is the reason to have this in your collection. Live improvised electric freak outs are my favorite background music. You can read to it, take drugs to it, invite the neighbours round for a Fondue,its perfect music...even if it is done by a bunch of West German hippies who would have loved to be Pink Floyd in 1967......in fact I would have loved to be Pink Floyd in 1967 too!?...Who in their right mind wouldn't?

DOWNLOAD the ashes of Ra HERE!
Posted by Jonny Zchivago at 19:54

Huge fan of senior Gottsching here. Dont think Manuel was a hippie for very long esp after his first Inventions album kicked the music into cosmic overdrive. Thank you for another another FAT kraut listening session! Das ist großartig.

What I like about German rock from this period is that it had nothing to do with the "I saw Elvis/The Beatles on TV when I was a kid and knew from that moment I wanted to be in a rock & roll star/in a band like him/them" that is always the same when any American or UK rocker mentions his original inspirations... either that or "I heard the blues on some late night radio station and I was captivated, just had to play that music". Instead of blues as a national heritage Germany had the composers, Beethoven, Mozart, later Stockhausen and the like. As well as nearby countries like Turkey and Romania whose folk music also found a way into their country. And when all those post-war German kids who learned flute and violin in public school grew up into the era of drug-taking and fierce social unrest, those who wanted to become psychedelic musicians didn't have to derive their sound from the blues as the English and Americans did. So Krautrock has far less of a blues or rock & roll sound. It did, as you say, pick up especially on "Saucerful of Secrets", Mothers of Invention and Soft Machine. Which is kinda what draws me to it, though I love the real blues it just gets tiring after decades of hearing white dudes wanting to sound like Howlin' Wolf, Chuck Berry, etc, even if they're talented legends like Jagger or Morrison. Of course Beefheart is an exception because he understood how much weirdness potential the original blues contained.

Great response and absolutely spot on observation on the Teutonic music scene of yore.
As an American I never really liked the blues for the same reasons it all is a: not very adventurous albeit musically and b: lyrically its really banal to say the least(and Ill leave it at that). Listening to the blues or country music is like eating meat and potatoes for the rest of your give or take a pinch of pepper to kick it up a half notch while right across the table there is rich fragrant Indian cuisine! The Germans really gave the finger to American music back in the later 60s and 70s and did their own thing their way of course Ill discount all the really atrocious German blues rock of that era that attached itself to the "kosmiche" scene like a remora.

it's alllll about Schulze on drums.