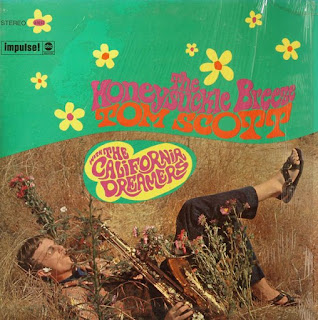 This psychsloitation-jazz-pop album is really rather good, despite the sunshine pop harmonies from the California Dreamers,who, as noted before on the Gabor Szabo album "Wind,sky and Diamonds", were ex-Ray Conniff singers who dropped some shrooms and got 'hip'.

They sang on the Ray Conniff christmas album that Brady and Hindley played as they tortured Leslie Anne Downey.So they have a truckload of bad vibes to unload, and they tried their hardest to do so here.
This record would have benefited greatly from a total lack of California Dreamers. Tom 'starsky and Hutch' Scotts faultless Sax work is impressive for a 19 year old multi-instrumentalist.Whats more incredible is that this was released on Avant-Jazz label Impulse.They must have been desperate for some chart action?
Its even got some twangtastic sitar nonsense from the near-legendary Billy Plummer too!?

DOWNLOAD the honey breeze that sucks HERE!
Posted by Jonny Zchivago at 22:31

Were I a lecherous middle aged bachelor trying to get in the undies with one of dem hippie chicks, I image this would be the soundtrack. No doubt I’d be spending many lonely evenings wondering why none of them stayed for a 2nd joint. Coltrane’s Naima next to Donovan’s Mellow Yellow and all of it smeared with a thick layer of The California Dreamers cooing along on top. i can’t believe my Impulse library of this sort of thing is actually expanding… about as corny and un-hip as it can get. Lord I hate this fucking shit but like any good auto accident I can't seem to look away. Thanks Jonny!

Thank you for this and the other psycho-delic jass.