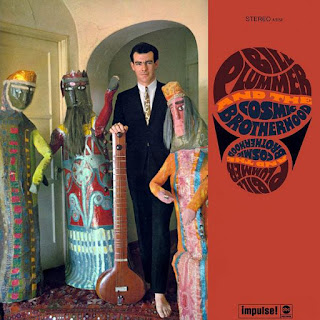 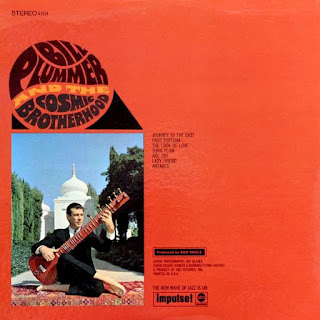 The world of Psychsploitation wasn't confined to Pop Music.Jazz also had a large go at cornering the burgeoning Psych trade.
I remember vividly first seeing this album in a crate at Camden market in the mid-nineties.A bloke in a business suit with no shoes or socks on, playing a Sitar!? I was tempted but I had my eye a Don Ellis live double,and unbelievebly decided to buy that!? Once i had got it back to my near-by shop.....yes I had a shop in Camden lock London for a decade or so.....,I unfurled the Don Ellis to play and out slid a double Shirley Bassey in concert album instead!?
So i went back to the stall and complained,and the geezer offered to swap it for something else......you guessed it, I asked about the album with the chap in the suit with the Sitar.
In unison, the guys at the stall cried out "Ahhhhh Bill Plummer!",and went straight to the box containing such treasure.
"Thats one fucking great album man" said one of the stoners on the stall."We got more shit like that if you want it?"
"Maybe next time", I said,let's see what this is like first hey?"
It had that trademark sixties Impulse Records smell as i unfurled the impressive gatefold sleeve and slid the vinyl out.
The first track was the semi-spoken psychedelic rap of "Journey to the East",describing the Cosmic Brotherhoods embrace of the Eastern culture fad that swept the western world post LSD.
A couple of cheesy, sitared-up cover versions of Pop tunes, help fill up the album, along with some free-improv numbers, and one of Bill Plummers rejected Jazz Compostions rearranged for the modern ears of the 1968 generation.
"Journey To The East" is one of the great so bad it's good hits that never was. I wouldn't say that Bill Plummer was the best Sitar player i'd ever heard,but he had a good image,and his shameless cashing-in,although i doubt they sold a single copy of this album,is something to be admired if only for its impertinance.The lack of shoes, Buddhist-style was a nice touch...."leave shoes and minds at the door" said an unnamed swarmi wag,never has that quip been more relevent.
I played this album to death and a small Bill Plummer fan club expanded.I managed to find the great mans e-mail address,and i Informed him of our worship,however tongue in cheek,and asked if there was gonna be a reissue. He replied politely,obviously touched that some youngsters had discovered his music,and that the reissue had fallen through, signing off with a reassuringly unsold out, 'Namaste'.

Having lent my treasured Mono version of this album to a drunkard friend of mine,the answer to the time honoured question of "What would you save from your house if its was burning down?"was answered....at least for my drunken friend at least, after the house he was staying in was consumed by flames, and he had to climb onto the roof to await rescue by our brave fire service.The one object he had clutched to his chest as he clamboured atop the flaming inferno, was....you guessed it.....that very copy of "Bill Plummer and the Cosmic brotherhood" on Impulse 1968! My two volumes of Re/Search's Incredibly Strange Music publications, i'm sorry to say, were consumed by the flames.The last time I saw him he (simon McAuslane to give him a name),needed to recompense me several hundred quid he stole of me when he worked in my shop,and he was a drunkard,and i didn't check the takings....etc. One of the steps in the Alcoholics Anonymous recovery programme is to say sorry and pay back any debt owed. I knew he would never do it, so I seized the chance to seem like a lovely fella, and said 'Forget about it", like those gangster types do in Brooklyn.....I want my fucking money now!!!!
Bill still plays concerts today by the way,aged 81!?: but no sitar, strictly on the double bass,and strictly Jazz.
Namaste!

DOWNLOAD on your journey to the west coast 1968 HERE!
Posted by Jonny Zchivago at 20:44

Gawd I love/hate this record. I picked it up as a cut out for two bucks, because it fit my budget at the time and that it was on impulse, a highly regarded jazz label, right? Another reason was that I’d been so impressed by the first side of a similar album, bought the week before at the same price:

Same hippy-dippy vibe, so I’ve always seen them as a pair. The first side of this one is all peppy and loaded with the odd time signatures that were a big thing for me back in the day. If you think the first track or the pop covers on Bill’s album are a hoot, check out the side long track on side two of this one; ta voyage to enlightenment or the sound of someone disappearing up their own arse.

Actually Emil’s had a pretty impressive career, playing with everyone from Frank Sinatra to Frank Zappa to Harry Partch. He’s still around if anyone wants to let him know how bitchin’ he really is….
https://www.facebook.com/Emil-Richards-131904240196237/

I make fun of these albums but in all honesty I do revisit parts of them on a regular basis. Go’head, make fun of my cult, yer only right to. As far as I know neither has murdered or bilked anyone out of their savings.

I know what you mean,when i first played this album I laughed. Always a good sign for me. It had that unique clued up cluelessness I like in a record. I bought all of Bill's Sitar exploits in one go.....The best/worst has to be Bob Thieles New Happy Times Orchestra!.....up next...like elevator music with inappropriate sitar twanging atop.....awful, but funny.
Theres a couple of Emil Richards, and a few Gabor Szabo ones to come. I hate Jazz guitar, but i love BAD jazz guitar, and Gabor was terrible.
Its all good fun, but I do love these albums.....and they have nothing to do with Charles Manson.

ps...hey did you see the comment on the David Koresh post where one of his surviving kids called me an 'Idiot'....i'll wear that honour like a medal.

An(other) album of the sort I never thought I'd see posted here. After getting passed my initial disappointment that it wasn't all "Journey to the East X 7" - I ended up loving the whole thing. Yet I had never heard that bonus #7 and Yentra II is/was exactly my kind of sitarexploitation-tune.

Maybe even that Eden Ahbez/Herb Jeffries mid-fifties album "The Singing Prophet" has a place here (no sitars, but sort of protohippie/disneypsych)? Not exactly sure what its all about 'cause I rarely pay enough attention to lyrics, but its surely some kind of pioneering new age mumbo jumbo in between the songs and a lot of thou, thee, thy, thine and ye.

Well I like to spread my wings every so often.Got a bit bored of lo-fi post punk and industrial....especially Industrial tapes....now they are BORING!
During the whole of the nineties i exclusively bought this kinda stuff, and incredibly strange music stuff.Genuinely weird things.
Yeah dig Eden Ahbez,the beatniks beatnik....like that Edens Island lp he did.
I never listen to the lyrics either, unless they're funny.....i can sing my way through 'Journey to the East' however.
This thread is nearing an end in amonth or so,then i'll try to find a conection to some Italian Prog...one of my early 21st century obsessions.

Italian Prog too? I'm not complainting - I love tons of that stuff but I was certain you couldn't stand it. But I shouldn't be so surprised. Most or all people I've met that are truly into music - usually cover a lot of musical ground too.

I must have been obsessing with the italians around the same time you were. Coming out of the 90's one of the attractions was the feeling of an undistanced, unironic heart on the sleeve kind of unbiased "honesty" - for lack of a better word. Well sometimes. Of course Franco Battiato, Franco Leprino and Area would be less of a "shock" to see here than Banco and Le Orme. But there's quite a few raw, weird and out there bands as well.

Agreed, not a fan of Banco at all,so that won't feature.
Anything that went against the accepted norm always attrats me. I even like British Prog,especially to wind up 'Punx'. I draw a line at Yes and ELP,although their debut LPs are rather fine.As for Krautrock I feel i should stear clear of those over hyped rocky shores....except for the odd Amon Duul as they fit into my Kult section with connections to the Baader Meinhoff gang.
A load of prog was as DIY as it comes too.

Thanks very much for the bonus singles here and thanks to rev b. for the Emil Richards LP.