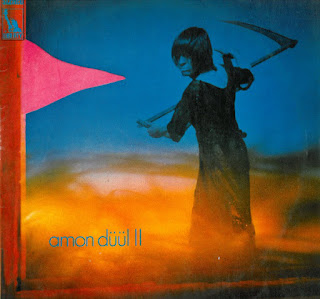 Yup, obviously their best album......apart from that,you'll be pleased to know that I have little to say on the subject.

DOWNLOAD to brighten up a Düül evening HERE!
Posted by Jonny Zchivago at 09:25

Hey I'd rather read a blogger who gives his own opinions and can actually expound on a topic and give his opinions in an interesting way, than someone who just copies allmusic reviews like they're the written-in-stone truth about the music they're posting. So boring and who are these allmusic reviewers anyway? Just hacks with their own opinions who often aren't worth listening to.

Of course i agree Anonymous. I don't bother with many blogs that just post a picture of an album and a link.Prefer the olden days of the radical music press.I try to entertain and confront taboo's....like Krautrock is a bit rubbish except for a few truly original groops.....but sometimes I can't be arsed to write anything....like about "Yeti".
Thanks for your comment

Apologies Northfield hat, life sometimes leaves me with no thoughts in my brain....i think the cover of "yeti" says it all actually.