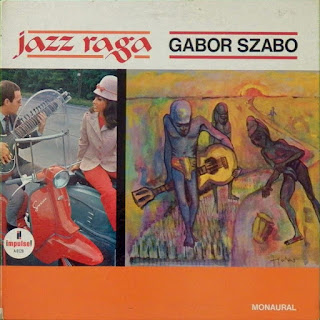 Gabor Szabo, either escaped the Soviet invasion of 1956, or the communists threw him out for crimes against music?
Somehow he found his way to California,found Bob Thiele who signed him to Impulse records, and released around half a dozen Szabo albums in a couple of years......someone must have bought them,but I dunno who? He did in fact beat the other besuited Sitar exponent on the block,Mr Bill Plummer, to the punch by a year or so.Being a political refugee does tend to focus the mind somewhat,spotting potential new ways to integrate and avoid being sent back.Although this album should have been reason enough to reject his application for US Citizenship alone.
Only in 1966 could an balding asylum seeker from behind the Iron Curtain be seen whizzing around LA on a Vespa with a sitar strapped to the back of his tweed blazer, with an adoring,heavily made up Modette in tow. On top of this, someone was cool,or fool, enough to have him banging out albums.
Just slapping any image portraying Indian Instrumentation was enough to shift enough units to finance another record in 1966-68, so fittingly there is a capitalist motive at work here.
The Sitar, is most definitely NOT an instrument one can just pick up and play at a whim.In the hands of Gabor it sounds like a badly tuned guitar with buzzing frets,and regularly snapping strings.
When he overdubs his semi-acoustic guitar part with the Sitar, it really does just sound like he's snapping the strings.
The cover versions are shameless Psychsploitation at its worst and naffest.Despite being abley backed up by the legendary Bernard Purdie on the skins,just Gabors heavily Hungarian accented vocals are enough to cause ones jaw to drop in disbelief.I suppose the Jazz labels had to do this shit to survive the Rock'n'Roll fad,and thank goodness they did.They really are quite hilarious indeed.

DOWNLOAD this digital raga HERE!
Posted by Jonny Zchivago at 00:15

Apparently all you needed in the late sixties to confirm your grooviness was to strap on a sitar. That sort of thing used to piss off Ravi Shankar no end. A dashiki was the prerequisite garb, so these suite clad over thirty jazzers on impulse were then and are now still hilarious, no less so than the ‘real’ things, and in many ways, less dangerous to the culture. They certainly retain a certain charm that eluded hippies. These guys were like parents trying to fit in with the kids and their music and culture.

"Gabor Szabo, either escaped the Soviet invasion of 1956, or the communists threw him out for crimes against music?" Probably the latter, or perhaps he was a crude attempt by the Kremlin to corrupt the west. It might be an open question how well they succeeded, but if you consider trump and the 2016 US election as part of that process, they do seem to have perfected the approach. Then again, they do have a predominately feckless, ignorant population to work on…

Carlos Santana has always considered Szabo as one of his prime influences. But ofc I'm sure you and rev.b both have a strong dislike for Santana too. I am aware that the uploader's introductions are meant to be funny and ironic but often - to a 'positive and spiritual' guy like me - they seem just to be negative. Personally I like this album and to me it sounds as if Szabo actually have had a trip or two.

The Ruskies would sooner have Clinton as they knew how to manipulate her. It's obvious as Barry was selling out to the commies before the election.

Loving this current thread of sitar psychedlic exploitation tracks. Here is a link to one of my own faves:
https://www.youtube.com/watch?v=Ej_ydiRNyM8

This is a cover of the 60s pop track of Up Up and Away by Sepoy and the Rajput. They did put out an entire album though I have never been able to track it down. This is worth checking out just for that first sitar riff!

Hi Heeren, Santana!!!....godawful stuff.
Having said that, there will be those albums Carlos made with Alice Coltrane and John Maclaughlan coming up when i get back on the spiritual Jazz path.
I think the thing that influenced Santana was that Szabo mixed up jazz with the coloquial gypsy musics of his homeleand rather than his short noted staccato stylee guitar work.From what i've heard of Sanatana they mixed rock with south and central american stuff.

I think saying that something is Crap is one of the most positive things a person can do.It increases the quality of life,and prevents one being dragged down by the mediocre.
i dunno why spititual guys like you are so critical of honest sceptics and cynics like me and Rev.P? i thought you were better than that.(nudge nudge wink wink)

Trundley.
That'd be Rajput and the Sepoy Rebellion...LP coming up in a few posts time.
I did go for some sitar lessons once, but they said i had to have my own Sitar!!!.....fucking elitism.So had to do the Tabla instead!

ERROR - Rajput and the Sepoy Mutiny..sorry.

Is it me, or does "Walking on Nails" sound exactly like 70's Faust, title and all? If someone told me it was a lost Rudolf Sosna composition I'd have no difficulty believing them. "Caravan" is pretty cool too, with kind of a Marc Ribot post-jazz sound. The rest I'd probably agree with you on. But definitely not a contender for the worst album you've showcased in this series.

Maybe Gabor faked his death so he could be the reformed Faust? Dunno,I think a lot of Faust sounds more like Szabo rather than the other way round.

Maybe Rudolf Sosna heard this album? Who knows, his guitar style was so bizarre that it's hard to discern who might have influenced him. Possibly Szabo or some cryptic Russian in his homeland. Listen to "It's a Bit of a Pain" on Faust IV to see what I mean.

This makes me wanna go on a stone soul picnic for sure.