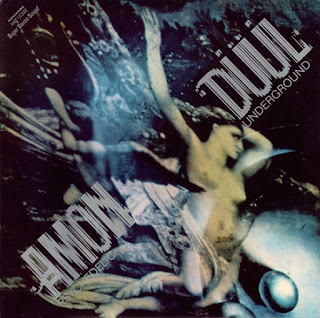 Not only is it the fiftieth anniversary of the Moon Landings,the Manson Killings,'Trout Mask Replica',and Woodstock, its 50 years since the birth of Krautrock on vinyl, via West German hippie cult jam miesters,Amon Düül.
For me, any bunch of middle class drop-outs who hang out in communes are liable to be labelled a 'Cult'.
Amon Düül grew out of the Kronwinkl commune in Munich that mixed radical political criticism with a unique vision of free-form improvisation.Sounds like a lot of fun does it not?Especially when those fun-lovin' Nutty socialists, the Baader-Meinhof gang, or The Red Army Faction, started to hang with the Amon Düül crew.
Chris Karrer himself stated when interviewed by Audion Mgazine and also, Off the record, Renate and Christian Burchard, among others  concurred on this matter, all stating that these sexy terrorists would bring a whole groupie crowd, booze and drugs with them. But they were really more trouble than beneficial in the long run. It seems at first that no one knew of their politics, until the band's commune was raided by the cops.....I find it hard to believe that the Baader-Meinhoff lot could possibly keep their mouths shut about their socialist utopia,and bore everybody shitless,but after the Police raids they were swiftly moved on.Or maybe they were moved on to avoid endless monologues about how removing incentives from life is a really good thing;and how this could be schieved by killing a few people,and hi-jacking Lufthansa jets.I can imagine that they were potentially even more tiresome than Crass.
There's no information as to whether those trendy terrorists actually joined in the Jam session that led to the four Amon Düül albums or not...personally I'd like to think that they did, which cranks up the ghoul status a few notches at least.
They missed out on an opportunity to be the teutonic Manson family by half a hijacked inch.
Personally I prefer Amon Düül to Amon Düül II, as the offshoot was far too musicianly than version 'I'.There's a much freer tribalistic feel to Amon Düül one that I prefer.
I dunno if this was the first 'Official' Krautrock album or was it 'Monster Movie' by CAN....I kinda view CAN as something different myself,outside of the Krautrock bracket,alongside Neu. So, that would leave this album as the official begining of Krautrock then or what?...discuss.

DOWNLOAD some psychedelic underpants HERE!
Posted by Jonny Zchivago at 08:17

During the height of Baader Meinhoff shenanigans middle class VW owners had car stickers that read 'I am not Baader Meinhoff'. Love to get one of these.

Somehow I have never heard any of the original/first Amon Düül albums. Many thanks for this.

No discussion needed. The K word was conceived by lazy English bastards at a much later date. If you need a pigeon hole then the bird first slept here. However, if you read the first few chapters of "The Gates Are Open" then you realise that you need a German Sociology / Politics / Philosophy degree to fully get the genesis. Don't have the time personally.

It's either this or the first two Ash Ra Temple LPs

Currently digesting "All Gates Open", the recent Can bio which is a totally fascinating read once you get past the standard synopsis of post-WWII cultural conditions and the classical/avant-garde/jazz backgrounds of the German members. When Malcolm Mooney crosses their paths, it quickly becomes a page-turner. I never realized that "Father Cannot Yell" was Mooney's very first try as a vocalist, and they kept the first take from September 1968 for the lead-off track on "Monster Movie" which appeared quite a bit later in 1969, as they thought it couldn't be improved on. So Krautrock was born in 9/68, and anyone who tells me that the early Can (who recorded everything in 2 track, making it sound good thru unorthodox mike placements and mixing) wasn't a Krautrock band can... well, I guess they have a right to their opinion! And I would love to get one of those stickers as well. Maybe you should print some.

Indeed chronologically 'Monster Movie' was before Amon Duul, but i think CAN were treading their own path musically, and Amon Duul had more of the classic Krautrock,for want of a better word, sound...prog rock made by germans in other words. Like Television weren't Punk is an example.
Then we got Tangerine Dream etc...thats Kosmiche and not Krautrock. Post Autobahn Kraftwerk...was also something else.
Ash Ra Tempel, Guru Guru,thats classic Krautrock for me.
If you want 'Krautrock' to mean everything that came out of the german underground from 1968 onwards then fair enough....that includes CAN.

I don't think Amon Duul (I) even qualifies as rock, they were more acid-folk-noise with rarely a rock beat to be heard, but they were definitely the originators of the Munich sound. Their vocalist Rainer Bauer emerged as the most talented member of their collective on their final LP Paradieswärts Düül and was guest lead vocalist on ADII's "Sandoz in the Rain", which critics often single out as the best track on their (imo) masterwork Yeti. Once Mooney joined Can they were pure garage rock, as Jaki Liebezeit was in a stage of hating and rejecting anything to do with his free jazz background and only wanted to play rock beats at that time. They all credited Mooney as being the catalyst in their becoming an actual rock band, away from the flute-driven psychedelic avant-garde stuff that they recorded as The Inner Space, with founding member David Johnson fleeing the band quickly after Mooney arrived.

I think Krautrock, which is a term embraced by both Faust and Conrad Schnitzler, so hardly a slur anymore, can be easier understood if you look at it as regional music developments that sprung up around the same time period. Duul in Munich, Can and Neu! as well as Organisation/Kraftwerk in Düsseldorf, Faust in the Hamburg region, Ash Ra Tempel & Tangerine Dream in Berlin. Most of these bands claimed they knew nothing about the music that was going on in the other parts of the country.