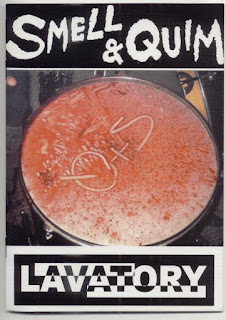 Ha Ha Haaaa!(fake Laughter)
The name of the band(?) is a parody of 'popular in 1987' female pop duo Mel & Kim.The more Attractive of this Stock,Aitkin and Waterman created duo died from cancer at the height of their fame ,leaving the entity as merely just Kim,the less fanciable one.So her career bombed...such is the fickle world of Pop.She died for you, kids!?..but the kids wish it was the other one who died. Thats like wishing Peter Hook had topped himself rather than our fav troubled miserablist singer. That scenario would have at least saved us from that toe-curling John Barnes Rap in the England World Cup song for Italia '90....get 'round the back!??
It says here that The power electronics collective's,"Smell and Quim's", creative output is often associated with controversial and taboo topics like fetishism(OoooYa!), alcoholism (Steady on now!), pornography(Shocking...not), and necrophilia(Now then guys'n'gals)?...well how fucking controversial is that?....not very is the answer.
Another point is that smell doesn't necessarily align itself with a quim. A bag lady's quim certainly would have an unwelcome aroma to it,so i suggest that if a young lady were to indulge in an intimate wash,it would just be 'Quim' we would be a-discussing? A slightly cock-centic point of view there?Appendages that don't have the greatest reputation of cleanliness themselves. A gentleman's wash in the sink before a hot date would work wonders I suggest?
Tee Hee Hee...did that man say 'Cock'?
As Industrial Noise goes this stuff is Power Electronics as seen through the eyes of a Carry-on film scriptwriter.Confessions of a Window cleaner crossed with Merzbow. As a former Window Cleaner myself,what I done to supplement my dole money,to the tune of an extra three hundred quid a week!!!, I can confidently reveal that the film was no exaggeration....yes, it was not a barrel of laughs.In fact at one house we were instructed to hurry up before her Husband got home or he'll stab us up!!!....No gratuitous sex either!?
The wall scraping Noise,of this CD-r not window cleaning, is fine, but the lyrical content is all a bit silly.I suspect that a few of Smell and Quim are in their late fifties by now,and should know better....its not funny.....but i do find myself sniggering from time to time,like Sid James catching Kenneth Williams as 'Doctor Tinkle' at it,or not, as in many English naughty comedies, with Matron (Hattie Jacques).
There is,however, a fine disrespectful tribute to the memory of serial peadophile Michael "Wacko" Jackson. Yes, he who was born black but died white,and in between he fiddled with kids.
Tracklist:

I'm sooprized ya didn't enjoy it?!? Guess th' art is too high!

Probably would have done twenty years ago, but harsh noise all sounds exactly the same, and i've heard it a million times......its like U2 just releasing the same tune over and ever again...er.....wait a minute,they do!?
Murderers are twats, and i'm a grown up who doesn't giggle at willy and tits jokes....er....ok i do,but.....aw fuck off!

Smell & Quim are marvelously fucked in the head ... if you reinterpret "tongue in cheek" ... moving on, I bought this when it came out, coz that's what a normal would do!

I own Stephen Hawking's Butt-Plug but have never been able to rip it. If anybody has got there before me then please spread it widely.

bruv, you don't do tongue. no use to no one.

i really really do have the vinyl butt plug and don't have it ripped ... fk might as well stop there, the circle is either virtuous or vicious and i'm worried it turns out to be a Candyman thing ...

for all you people, say "Stephen Hawking's Butt-Plug" three times in succession at your own risk ... but i really don't want to know what the consequences are