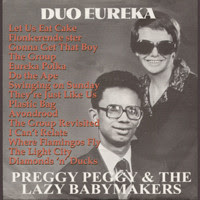 Peggy returns with 15 more of her children,all with the various congenital diseases,deformities,and learning difficulties that reflect the human race. You would have been burnt as witch in the fifties if you made music like this without having a degree in modern composition. John Cage was alright,he had one of those.
Nowadays, any dysfunctional lunatic can either become a Bhuddist or make experimental noise on their relatively inexpensive digital multitrack facility.
This was what we wanted wasn't it? Be careful what you wish for, because you just might get it...and we have!
The sheer mass of DIY "Experimental" music available on the ethernet is mind boggling,impossible to listen more than once to anything. In olden days terms, that means that Matt Groening would have not elected himself Captain Beefheart's number one fan, and I wouldn't have discovered the shiny forbidden world of prog rock..
I suppose, getting to enjoy such dreadful rackets as Preggy Peggy, modern kids would have to start with the current Hipster's fav Throbbing Gristle and work upwards.....or downwards, depending on your perspective. Pop,or unPop, Music appreciation and History classes would be a valuable asset to stop these ignorant young fools from repeating the older generation's musical faux pas'.
Preggy Peg, can I call her that(?), is likely more accessable than most because its also.....'Funny'.
There's Noise, there's Plunderphonics, there's samplerdelica,there's gentle,but sinister, Pop,there's even some psych workouts? What more could a modern teenager who doesn't like Hip-Hop and its derivatives want? This could be chart music one day......featuring 50cent, or Stormzy.

You can keep this shit coming all day long ... c'mon Dr Z, step towards the dark ... and if you have a secret vault of Chocolate Monkeys?

Tee Hee are you challenging me?..simper!

I can confirm that "Do the Ape" doubles as a disinfectant.

Yummy, nice bit of easy listening for the rest of the week, thanks Jonny