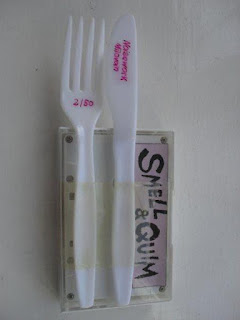 The natural length for a pop album is forty minutes,and I think that 20 minutes is the natural length for Smell & Quim style noise.This is on the softer more palatable end of the noise spectrum,where space is left for some subtlety to stave off the boredom.It's more of an old skool industrial outing for our favourite purile pranksters from oop north,or dahn sarf if you live north of Yorkshire,
My father(from north of Yorkshire) used to gather us children around the fireplace of a winters evening during the power cuts of 1971.....no telly was there?..... to tell us about the time he ate some Pussy. We were transfixed as he described how in desperation, him and emasciated buddies, found, killed and ate a Cat when on the death march in Poland during WW2. It tasted like Chicken he said. "Are you sure it wasn't a chicken?" I inquired in hope,only to find out he ate a Dog too,and some rats! It begs the question as to what would have Vegans done on the death march? Eat Grass and mud?
As my father had been on strike for three months from the Post Office,we kids were wondering whether we would have to eat pussy too, as we were totally fucking skint,and the eventual pay rise won would never make up for the lost wages! If you think things are fucked now, you should have experienced Great Britain during the seventies.That makes Brexit,and co-vid look like a damn fine time that was had by all. These conditions, combined with Yes's "Tales of Topographic Oceans" have been blamed for the emergence of Punk Rock.So what are our brainwashed kids gonna do in reponse to the Co-Vid crisis?
The answer is , Fuck All,'cept warble about how their boyfriend has chucked them and get out the autotuner AGAIN!
Tracklist:

Thanks alot for that one!!!

I'd rank most S&Q I have heard well above most "conventional" noise acts: let's take one idea and ride that into the ground (disappointingly, "Eat Pussy" is a good example of that). Of course, S&M have been around so long by now that it's impossible to generalize: the early stuff (ca. 1990) seems to use all the available analog and digital noise techniques, often there is a lot of variety; the later stuff (ca. 2010) is more conventional in that it fits pretty well into what is considered noise at that point (but "Lavatory" is excellent). I found "The Jissom Killers (1997) in my iTunes library, lot's of development and 'drama,' clearly a lot of thought (yes!) went into its composition (yes!), a ferking masterpiece, I say! Why am I writing all this?! JZ, please post more S&M!!!

Even Smell & Quim has an oldies section;

Who knew they were a cover band back in the day....

just a heads up, but mediafire are starting to delete content from accounts which havent been logged in the past 8 months. hope nothing on this blog is lost, the stuff on here is fantastic

I have a single of "Rectal Death Pump" somewhere here in the Archives.