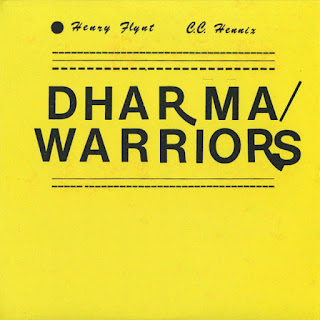 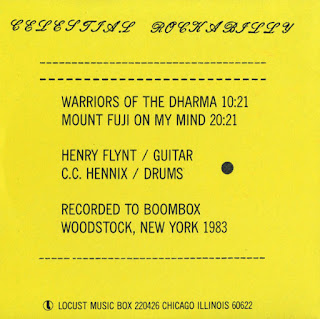 Good to hear that american minimalist legends are as clueless and talent strapped as we are. With the technical efficacy of The Prats ,Drone masters Flynt and Hennix provide us with a 30 minute rock work-out that some not so bright spark captured to a cassette on a Boombox. It would have been thrown in the garbage were it not for the glowing CV's of the two performers. Hennix's drumming drifts between the mildly incompetant to producing drum rolls that echo Rat Scabies at the height of his powers. Flynt, without the easy stability of a drone to prop him up,struggles to sound like anything more than a schoolboy practising in his bedroom.Now we know why he was booted out of the Velvet Underground.
The begining of 'Warriors Of the Dharma' even has hints of Rhys Chatham's Guitar Trio,which Ironically the Minimalists had originally inspired,revealing a disturbing lack of ideas for a man once so proficient on his fiddle when it comes to improvised droney bluegrass. If this album had been made by a couple of unemployed kids from Grimsby in their bedroom,then I would have been singing its praises;but its been made by a pair of intellectuals who should know better. Admitedly not intended to be released,but nonetheless it was.I'm just surprised that it exists, so that in itself is its justification.
DOWNLOAD as the intellectuals jam HERE!
Posted by Jonny Zchivago at 10:32

So much of flynt's work is really fine.
That "hillbilly" stuff really works if you submerge yourself in it.
I originally thought he was crazy. He isn't.

Wow thx, didn't know of this one. Happy new year! (Nothing ever needs to "justify its existence" however.)