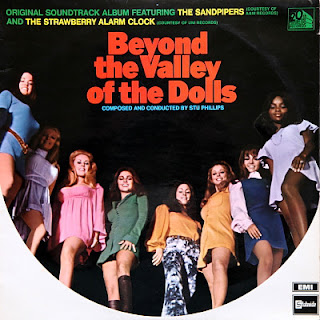 Russ Meyer's classic Sexploitation Psychsploitation cult masterpiece that is 'Beyond The Valley Of The Dolls', with a soundtrack by a fictional band, The Carrie Nations, that puts most rock music flicks to the sword. The Carrie Nations also make The Strawberry Alarm Clocks contributions pale into insignificance, with such Classics as the lovely ballad 'In The Long Run' and the slightly naive summer of love anthem, "Come With The Gentle People".......surely, this being a Russ Meyer film, that should read as 'Cum in the Gentle People';which i'm sure most of the staff did,or at least tried to.
One has to ask oneself why a long out of print sexploitation soundtrack from 1970 by a band that never existed sounds better than anything played on the radio today?....but,who actually owns a radio these days anyway?
Stu Phillips and lyricist Bob Stone cooked up some of the finest Power Pop of the Psychedelic era,backed up by the off-screen session players and vocalists, notably Lyn Carey,who wrote a couple of the tunes as well as sung them.
Then Russ did his bit by recruiting only young ladies with Large Breasts to mime(very well I may add,even though i rarely looked at their mouths) to the musical nirvana of the Carrie Nations.Lovely Lovely Lovely.
Malcolm MacLaren hired Russ Meyer to make the Sex PIstols movie "Who Killed Bambi?",but little twat Rotten ruined it by being an arsehole. That movie could have been as good as "A Hard Days Night" but with lots of Big Tits (The biggest tit being Lydon). Instead of the interminably awful "Great Rock'n'Roll Swindle".Another in the long line of terrible attempts to transcribe the magic of Rock'n'Roll onto the silver screen.One of which,"Beyond the Valley Of The Dolls", most certainly isn't!

DOWNLOAD your pants HERE!
Posted by Jonny Zchivago at 23:13

Thanks for posting!! I'd like to strap you on sometime.

I am glad to have this album again. Thank you! I was introduced to it through the music of Redd Kross. They had the good taste (?) to cover the Carrie Nations' "Look On Up At The Bottom" as well as Charles Manson's "Cease To Exist" on their debut album. I bet they would enjoy your blog as much as I do.

Not sure I know who Red Kross are? But they score some brownie points for being hip to the carrie nations.

I believe film critic Roger Ebert wrote the screenplay of that movie as well. He was a confused man when he had criticized violence against women in movies, yet in some films he liked had extreme violence towards them in gruesome ways possible.

So his screenplay was quite gratuitous in nature, only because he wanted a reaction from the MPAA (Motion Picture Association of America).

Lynn Carey sang the songs in the movie, but not on this album (she was replaced because of record-company shenanigans)
Weird trivia note; Lynn Carey was invited by her friend, Jay Sebring, to a party at Sharon Tate's house. Fortunately for her, she didn't go.

I think a couple of these are indeed Lyn carey..i replaced them with the better takes..."Find it" is the version from the movie, and 'gentle people' too i think.....she was a bit of a looker too,so I dunno why she never got a part in the movie....maybe her tits weren't big enough?

Bizarre that she also has a Manson connection,after my relentless Manson thread that i thought was finished!? It goes on!

Not sure if it's even true but there were rumor's Lyn met Manson hearing him sing 1st and became friend's w/ him & had some friend's in the family. Even heard someone told her going to Tate's party wouldn't be in her best interest.
Anyway's love this movie and was great that Strawberry Alarm Clock was in it.
Crazy that Ebert helped write it. Always like Rob, Siskel was a asshole.