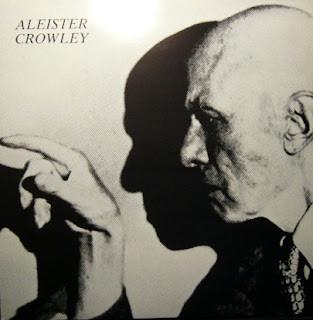 Leamington Spa produced some recording greats, like Swell Maps,The Shapes, and....erm Aleister Crowley, aka The Great Beast.
Yes, Satan came from an upper middle class town in Warwickshire,and if you've ever visted there,you'll see why.
So this slightly posh bloke spent most of his free time,of which there seemed to be a lot, mucking about with the Occult,flirting with Nazism,mountaineering,and shagging.......lots of shagging.....of all gender types.
Basically a decadent Occultist, he became the object of fascination for many an impressionable musician in the 70's and 80's. But he seemed to be a bit of a Twat as far as I can see. Narcissistic and self-indulgent,Crowley considered himself to be one of the outstanding figures of his time.....don't we all?
Here we have the complete recorded works of Crowley's poems and innvocations from about 1914 to 1920 ,plus a rousing operatic version of 'vive La France', for some strange reason.
The Devil he were not, a silly old knob, he certainly was.

if only big bad uncle Al had picked up a guitar instead of his, errr, wand, he'd have been the world's first rock'n'roll star. chance missed me thinks.

His last words were "what an ass I've been", if that's any comfort.

I thought he worked for British Intelligence during the war? Fighting against ,not flirting with, Nazism?

There were plenty of Brits who flirted with Nazism including certain members of the royal family....being a Nazi means you fight for your nation as you are a Nationalist. Crowley was mildly interested in German nationalism,and he did some work for Brit intelligence....he was getting on a bit by WW2.

Very comforting Farquhar, thank you...I may sleep tonight after all.

As I say, this blog is going rapidly downhill. A Charles Manson post can't be far off.

the nazis actually kicked crowley out of Germany, the nazis didnt like crowley.

Funny you should say, i was gonna ignore Mansonet famille, but was talked back into doing so by the comments section. Further downhill we go.

Copyright infringement from Hell.
Like i said before kids...keep trying and even scamazon power is nor enough and mediatire will let you through to download anything.

What the fuck?! So does mediafire just like give-up after one try? I've been a blog scavenger for 10+ years and I've never seen this happen.

Back from 2 months Holland, downloading lots here and enjoying the comments, specially the ones that tell you you're blog is going downhill, like you are their special juke-box barfing out whatever they want to hear, it's kinda the same on my blog, specially re-upload requests, I don't even react to them anymore, usually requests like that only make it sure that I won't re-upload shit :)

Welcome back Henk, your relative sanity has been missed in the comments section.
If my group plays a gig i enjoy the prospect of being Booed,so the same applies here too. If the blog's going downhill for Mr John Q. Public, then i must be doing something right....right?
I've been accussed of racism twice in the past few weeks...first about 'White Rastas', and yesterday against Germans!?....check the Manuel Gottsching "Inventions for Electric Guitar" post.....those poor downtrodden Germans,diddums.
What I get accused of more frequently than being a Nazi, is 'why do I post records that I obviously don't like'.....they either misunderstand my cynical humour or don't understand critical writing....most likely both,if not just that they are stupid.......We are not a service madam.