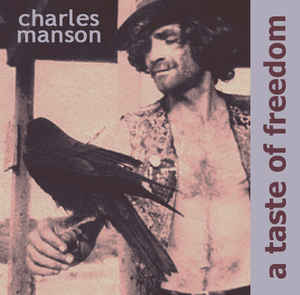 This is a bunch of recorded phone conversations between Charles Manson and a useful idiot friend. Hear our favourite illiterate lunatic speak on Christian and Muslim interactions, the Holy Spirit, world peace and more. Recorded in late 1990 and early 2000, it is a window into the timeless,pointless world of Charles Manson.
If there was one thing that Charles Manson was good at, it was talking complete nonsense to any willing victim who was stupid enough to listen.He couldn't read or write but he certainly could speak.He could even be credited with inventing white Rap?
Ironically it seems he believed in God almost as much as his own luminescence.
This is my personal favourite Manson record,mainly because I like the ramblings of bored deluded lunatics, and automated messages,like the ones that keep interrupting the conversations,such as: "This call comes from an inmate in a California State Correctional Facility"
As it says in the liner notes:
"At times startling in the lucidity of their depth, but still warm and casual these conversations touch on many subjects including the American Civil War, raising children, surviving on the land, world peace, ecology and Charlie's own personal history. These dialogues open an unbridged window into the thoughts and feelings of perhaps the most important figure of the post modern era. Charles Manson, unfiltered and unfettered by media interpretation or presentation speak to the humanity within us all.".....er....yeah!?

DOWNLOAD a taste of a californian state correctional facility HERE!
Posted by Jonny Zchivago at 09:54


i see that you are a white supremicist.

you seem to think its cool to post stuff from a murderer and a white supremicist. i'm sure you have lots of oh-so-punk reasons and excuses, but it boils down to NAZI-PUNKS-FUCK-OFF...

so you are a racist and a nazi.

not visiting this site again, fuckwit..

I bet he or she's fun to have a night out with.

Wow, I guess anonymous didn't read ANY of the commentary on the CM posts...oh well...

What is the exit strategy for this lengthy foray into Mansoniana (which I predicted a short while ago)? Not sure I can see a way out.

Indeed Double D, these actual racists are quick to point the finger, without really understanding who they're pointing the finger at, or themselves. I've been accused of being a Nazi for posting Come Org stuff, Bianchi stuff, Skrewdriver(from before they went Nazi), and lots of Industrial stuff.
Also been accused of being a Socialist by the Tea-Party crew.
Reading the commentary on these things would have helped these sad cases a lot to open their minds a tad.
Its clear that i don't approve of CM or his followers.Just reading the headlines does not reveal the contents.
Its like thinking you've read War and Peace by reading the title and forgetting the futher 800 pages......real dumb,and reflective of the internet post truth era.

There is a way out, and its coming soon, after Bobby Beausoleil. watch this space....unless you really are Anonymous No.1 and you have stormed off to smash up your toys?

...but we aint done yet:
https://pettyvendetta.com/manson-speaks/

"This call comes from an inmate in a California State Correctional Facility" Brilliant. I hope to hear the current POTUS's asswiped quips interrupted by that phase one day. "fuckwit'? "asshole"? Rousing the rabble again I see Jonny. It is indeed a good day! Since you've had your fill od CM, I look forward to the next profit you'll turn to for guidence. Thx Pitoff, I'll save the link, but my Manson cup raneth over years ago. Pity there's a ready audience of the faithful ready to receive such wiz-dumb.

Hi, I am Anonymous n°7842
Some say that all the Tate's story was faked, That Manson is performing in jail sometimes like the actor he used to be...
http://mileswmathis.com/tate.pdf

Some say that we're all actors in a very bad movie,and everything outside of that movie is, yes indeedy, Fake.
Some also say that everything some 'enlightened' persons say is fake isn't actually fake and those who claim they are have serious esteem issues. Fantasists who were ignored as a child.....like Manson.
Is this clear?

Manson was a fake. He was a dwarf with a bunch of actors pretending to be killers in the ongoing anti-peace movement CIA project.

Ahaaaaa! I was waiting for the false flag hippies conspiracy nut theory.

....and whats wrong with Dwarves?

The Dwarves are young and good looking