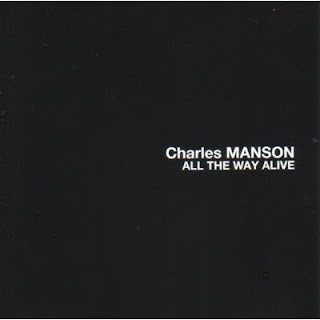 Studio recordings recorded on 9/11 1967 by the,then recently released rather than recently deceased jailbird and instant Hippie that became known as Charles Manson.This is his Black album,or at least,and more accurately, his 'Smell The Glove'.
Manson seemed to come out of prison aged 33 as a fully formed Hippie,talking the talk and walking the walk,like he was playing a role of a 'Hippie' in a Dirty Harry movie. This is how he had spent his former existence, taking on roles to manipulate situations to his own advantage. No-one seemed to notice he was over a decade older than any other Hippie at Haight-Ashbury, and silly middle class fools enthusiastically fell at his feet, basically because the Beatles were otherwise engaged.
"Hey, I write songs man", said the hip looking sexual predator at the party. "Wanna Listen?".....er no, but he whips out his Acoustic and plays the fuckers anyway.
Thats the kind of fool Chuck Manson was in 1967,and as always happens, young lost girlies swooned.
These recordings were made when Charlie was slightly less demented,and less of a Gobshite,and hadn't consumed enough LSD to believe he was Jesus yet,or as he so eloquently put it the 'Son of Man'.
He also hadn't yet inspired his drugged up followers to slaughter innocent persons to start the race war that would lead to himself taking power after the blacks fuck it up......this was actually his genius plan!? Helter Skelter maaaaaaan!......what a deranged tit, maaaaaaaaan!
The interview from these sessions reveal the nascent Gobshite that we all know and,if you're smart,dispise.
He does actually speak the kind of jumbled bullshit that a modern Jesus would say;so maybe he was the second coming after all.Thank fuck we didn't execute him after all, or we'd all be walking round with a mini gas chamber hanging on a chain round our necks,worshipping the 'Son of Man'........some of these fuckers do actually exist now as we speak.

1 Devil Man
2 The More You Love
3 Two Pair Of Shoes
4 Maiden With Green Eyes (Remember Me)
5 Swamp Girl
6 Bet You Think I Care
7 Look At Your Game, Girl
8 Interview
9 Who To Blame
10 True Love You Will Find
11 My World
12 Invisible Tears
13 The Night Life

DOWNLOAD the genesis of the son of man HERE!
Posted by Jonny Zchivago at 15:49

Don't think Charlie consumed any LSD, that would blur his handle on the con artist shtick he was playing. Charlies a huckster and petty criminal.
Keep posting his stuff and see how many crazies comment...

All the best
Mike

You're right of course,he dosed up his family while pretending to drop Acid.Then he could weave his wicked spell upon them......but i reckon he did drop acid when he wasn't working,which explains his Jesus complex.

what kind of dumb ass do you have to be to believe bugliosi? lol , yeah charlie gave me acid and used his wizard powers to make me kill people to start a race war, thats real believable and true XD god damn people are stupid

I always thought that he had a great voice, of course what he did was horrible but that doesn't mean you can't enjoy his music, anyone who says otherwise probably still listens to Michael Jackson or Gary Glitter.

Speaking of Manson, did you see that lecture that Nikolas Schreck of the murders? pretty enlightening.