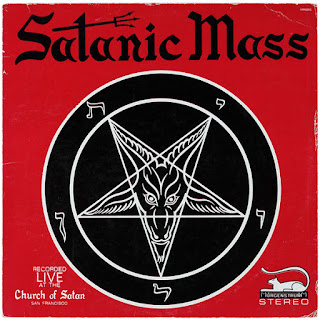 Anton LaVey was the founder and first High Priest of the Church of Satan until his death,just missing Halloween (what a shame?) on October 29, 1997.
Recorded Live,which is an anagram of Evil is it not(?),at the Church Of Satan in San Francisco on Friday the 13th of september, probably on Hate Street.
Anton treats us to more droning, seemingly deadly serious, monologues from his Satanic Bible, backed up with Howard's(Anton's) funeral parlor organ work.
Rather disconcertingly, Mr LaVey bore more than a passing resemblence to your humble Blog author.But I can assure you I have nothing at all to do with this bullshit nonsense....ask my friend B.L.Zebub.
One suspects that this has more to do with showmanship rather than,an actual religion;but unavoidably, some people take it far too seriously.Something I suggest didn't apply to Anton LaVey himself.
He did,however, manage to 'get off' with Jayne Mansfield before she was decapitated in a car smash.So it was to his advantage to nuture his minor celebrity status.
Of course, the membership of The Church Of Satan is booming(Yawn!).You can join online for a few hundred Dollars, and shock your mum and dad and your straighter friends.(Giggle Giggle Titter)...oh what jolly japes?
As laughable as Satanism is, it has just as much basis in fact as other major religions......i.e. None.


The Satanic Bible:
2 Prologue
3 Book Of Satan, Verse I
4 Verse II
5 Verse III
6 Verse IV
7 Verse V
8 Hymn Of The Satanic Empire, Or The Battle Hymn Of The Apocalypse

DOWNLOAD this satanic mess HERE!
Posted by Jonny Zchivago at 12:13

I agree with the purposes about the highest secret that you learn in the highest degree in every religion, is that there is no secret, no magic, only words.

But the satanic church in the usa seems like being a dangerous organization for anyone who step a foot inside, even by curiosity. They use to introduce new members with a kind of brainwashing that freaks anyone out or in.

I knew an asian guy in the '90s that had to runaway the states because he wanted to see wtf was they doing in that spooky group. He was student in an university (?) and there was such a group in the place. He asked to join them and during his initiatory ceremony, he found one moment to leave discretely the place. Than things turned bad and the days after, he found a dead chicken in his bed, than writings with blood on his room's door.

His parents, far away, had been phoned with threat of his dead. So he quickly left everything and went to Europe... Even there, he had to be careful in the case he wanted to pursuit his studies, maybe a little paranoia too (?) But he was a cool guy that wasn't joking at all about that.

Indeed, the secret is thats its all made up.
However,since i've been slagging off Satanism I too have found a dead chicken on the premises, in my fridge.
I cooked it and ate it.....me being a vegetarian too!!!

The really spooky thing about this album is that if you play it backwards, it's Dana's "I Can Sing A Rainbow".

(More humor of this quality over at FalseMemoryFoam©)

Yes but the guy was rather talking about a dead bird than nuggets...
Maybe those students turned into satanism take it more seriously than goth-hard-death-rockers?

Surely Student Satanists would prefer to leave Chicken McNuggets rather than spend money on a real chicken?

Honestly there are things in this world from supernatural/paranormal to demon's/devil's that can even change the future for bad to happen. Real Satanist's do ritual's and some would say it's not for the positive. It's not a joke. His mistake was being curious....You can't just be apart of a initiation while a circle is open and walk out and think everything is going to be alright. It will follow you. 1 thing i learned evil is easy to get into or granted compared to good/positivity. Why the old Lavey house in SF is still haunted and even people who live there/rent room's (most who aren't satanist's) end up blacking out(doing thing's not remembered and feeling possessed), turning to hard drug's and od'ing even though they weren't user's before than. Nevermind the suicide's or people changing into people they weren't quick.
It's serious shit. Not to be played w/. Prob is people are sheep, and we know what happens to those, slaughtered.
PS Even Kenneth Anger won't step foot back in the place and him and Anton in the 60's/early 70's opened door's and did many ritual's. Shocked Ken's still alive and Anton died so early compared to him. Ritual's/Spell's can catch up.
Did he say what was written in blood?

The only Satan is the Human race.We can make bad stuff happen ourselves without the need for actual demons to do it to us.