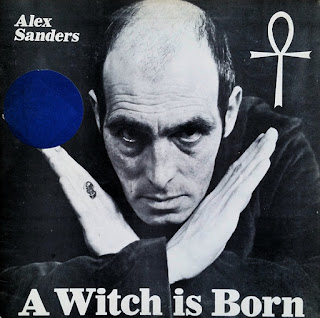 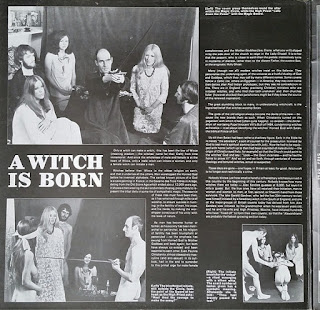 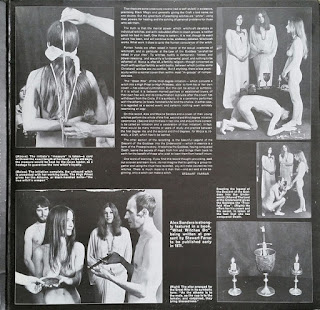 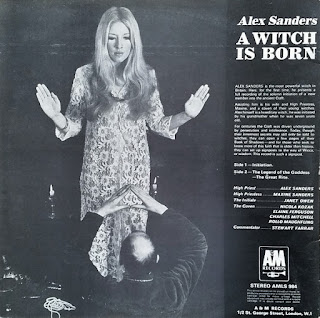 "Alex Sanders is the most powerful witch in Britain. Here, for the first time, he presents a full recording of the solemn initiation of a new member into the ancient Craft."...it says here.

He's the bloke on the cover who looks like a former homeless alcoholic who's moved on from begging for small change outside Sainsburys to taking his clothes off to initiate attractive young women."
Luckily, we don't get to see Alex full frontal, as he conducts the ceremony in sound only, with totally inappropriate lush string sections singing merrily in the background, chugging out Wagners 'Ride  Of the Valkyries', like a binned episode of 'The Onedin Line'.Up front is the hilarious whispering commentary by Stewart Farrar as if he was describing a Royal wedding, or a Snooker match.
Sanders: "Blessed be thy Breasts formed in Beauty"
Farrar: "He kisses the left Breast and the Right Breast"!?

Yep, religions are all invented by dirty old men alright.
The naked young woman called Janet(? the witch?) then gets tied up and lashed by the the nude former-pisshead. I think i'm going to be sick....just check out those pictures on the cover,like a Wiccan copy of Health and Efficiency magazine.
This ceremony is soooooo old and ancient that,like the Bible and God, the Wiccan tribes spoke in 16th century Shakespearian English.
God and his counterparts was seemingly very English.

DOWNLOAD or be cursed for eternity HERE!
Posted by Jonny Zchivago at 11:44

Jonny, have you heard of Peter Peter The Pumpkin Eater? I heard them many moons ago on JP when he played their demolition of "Born To Be Wild" but can't find it anywhere. Have you heard of them or did I imagine it? Stuff like this was the real reason Peel was great. Keep yer ears peeled. Praise be to Jandek ps got any Ivor Cutler?

I used to work with his daughter - after her dad's death - she was the spit of the blonde woman so I guess that's Mrs Sanders. Daughter v nice, not a witch.

Sanders was renown as a self promoting charlatan.
Oddly enough I still have a couple of books by Farrar somewhere.
These days I am older and know better though...

Sorry Anonymous, you've out obscured me, never heard or heard of this record....sounds good though.

PS Ivor Cutler is too big for this blog......a great man however....my fav is jammy smears, with the story about the two brothers and the lumps of coal and chickweed for dinner.....you never know, he may appear in poetry month?

Thanks for the info Andy R....might have guessed it would turn out to be slightly less pervy than I made it out to be.....real life sucks.

Jandek be praised Jonny, found the clip from the Peel show. The band is actually called K-Tel Wet Dream and the track is "Sissy Bar", although JP seems to think its "Born To Be Wild" by Peter Peter the Pumpkin Eater, as does the picture in the video. Is it me or does the guy on the left look like Jeff Lynne? Now that's an ELO I could listen to! Anyways its on an album "Peter The Man Eeter (The Peter Fonda Album)" Enjoy https://www.youtube.com/watch?v=Q5Behc8SzpM

Jonny, there's an album you missed from this series here: