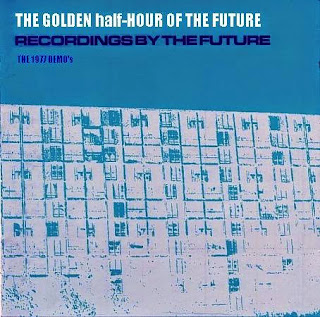 As we are on a brief Clock DVA/Sheffield trip,I thought I'd make an abridged version of the Human League/Future compilation,which inexplicably mixed up all the tracks into a non-sequential soup.
Of course Adi Newton was a founder member of The Future,which sprouted Clock DVA and The Human League.Kind of a London SS of Industrial Electronica I suppose?(discuss)
You can get the untampered version in FLAC here)

DOWNLOAD the future from the past in the present HERE!

Also,as a Bonus,and so I can hide them from search engines,we have two boots of Sheffield scene Elvis's, the Cabs.
I got DCMA complaints for these from someone(twat!),but feel free to download them complete with my 'excellent' artwork, by the links below:
"Beat Rail(1976)"
"Chance vrs Causality(complete version)"
"Live at the Final Academy"

Enjoy.
Posted by Jonny Zchivago at 19:14

You are sooooooooo minimal lately...

"The Golden Half Hour Of The Future"!!! Classic! I laughed out loud!

I did much the same myself - ripped the CD and reassembled the tracks while wondering why on earth they didn't do it in the first place as it doesn't make any chronological or indeed even aesthetic sense. What is really annoying is the fact that on the 'Excerpts From The Golden Hour Of The Future' 12 inch there are tracks that are not on the CD - so obviously it was a marketing decision to only include 7 The Future tracks as clearly far more were recorded and archived.

PS> Does anyone know what the font is called that was used by The Future and The Human League on their tape/vinyl covers - It is the same one used by The Process Church - I remember I used to use myself in the old world letraset times but can't find the name of it - It looks similar to the 'Euro' font but not exactly.

AH, SO YOU SPOTTED MY INACCURATE CHOICE OF FONT FOR MY ARTWORK EH? I'll have to search for those extra Future tracks,and the font now!

Yes indeed Zeb, I can't get enough of 'Minimal' at the moment.Its quite perfect when its good minimal.

Is that like as in "minimal effort", ie, swiping stuff from other blogs? 'Cause you're clearly the king of that particular hill.

At least you have the decency not to dispute it. Minor scruples.

I hope you have the decency to now kindly fuck off.But you won't will you,because you have some irrelevant moral Highground to preach down from.

I think the pop abortions that were the Music Of Quality & Distinction Volumes cast a long shadow over the British Electric Foundation - when in fact, they produced some of the most 'retro-futuristic' (see it's catching on) electronic music of the early eighties in my oh so humble opinion (I remember getting the Music For Stowaways cassette and an Amstrad 'Walkman' copy for my 12 or 13th birthday and spending weeks walking around my grim up north village thinking I was so desperately trendy) - anyway, the music has aged far better than me:

Also according to a reliable source on the internet (a bloke on Discogs) one of The Future tracks on the 12 inch not featured on the album itself is actually the track Wipe The Board Clean from the Music For Stowaways cassette, re-titled for some reason as 'Titled U.N.' (though it does have that 'Going For Gold' TV theme song feel about it, curiously as does some of the tracks off Neu 86 and the Michael Rother solo albums).

Also there is a Clock DVA link in that one of the tracks on the MFS cassette, 'Uptown Apocalypse' is co-written by Steve James Turner and Adi Newton.

Just listen to A Baby Called Billy and it becomes apparent that the true home of techno is the Steel City and not the Motor City.

Hey Mr Anonymous, you will like this! - here are some rips I swiped off another blog so long ago I cannot even remember its name - and it took 'minimal effort' to re-tag them, add some images and more info - like the despicable fiend I am:

You can have the 1997 Caroline Records CD reissue rip which collects all ten tracks in one handy sized CD rip:

I bought those BEF cassettes too.Even the early Heaven 17 singles! (where do you think i 'swiped' my nom de plume from? ie the clockwork orange pop chart which includes The Heaven 17 and Johnny Zhivago).
I must have played them maybe twice? Found them a bit bland.But download 'em from Wet spots(as its now called),and played them once. A bit better than bland in a retro futurist kinda way.I'll play the fuckers again and re-evaluate fully.
But it does have the missing Future tracks on it! you struck obscure minimal electronic gold!

Going for Gold, now there's a TV quiz. Awful creamy browns,and pale yellows,with a huge buzzer button.Contestants who could hardly speak english.Henry kelly reading the autoque like he could hardly read,or see.Went on forever and all you won was a trip to the fucking Olympics,and no runner up prizes.Not even a Bendy Bully equivalent!
Them were the days.

Yep I hate self-righteous twats like Mr anonymous. I doubt he objects to buying second hand records,or even buying a record that someone else has.He's against mixtapes,listening to the radio in case someone else is too.But at least he has his integrity and decency! Anyway the comments section will no longer be sullied by his ilk,as i have introduced comment moderation.I used to find it fun to spar with these media puritans/trolls,but now its just fucking boring.
Its about File Sharing,and writing about stuff; not to show off my 'incredibly rare record collection'.He never mentions the majority of stuff on here appears nowhere else in downloadable form?As for minimal effort,he wants to try and write something vaguely amusing every day.he managed one line in the comments section of this reshared/but edited and redesigned artworked post.

lifelong cabs fan, listening to the chance vs causality soundtrack for first time ever, thanks to you. nevermind those self-righteous gits and keep on doing what you're doing, sir!

Fear not, the self righteous will not stand in the way of providing access to such gems as Chance vrs Causality. The cabs were probably the most influential band for me musically.I bow at their alter.

the typeface on the future release is called Microgramma.

The mega link for the chance vs. causality is dead. I don't usually ask blog owners to re post items but this is so rare. It would be much appreciated.

Are you sure its dead?...Looks ok to me:

Give that a go.

The link you provided worked--thank you very much for that. However, the embedded link in the post, which I tried again out of curiosity, again gave me a mega page :"The file you are trying to download is no longer available. This could be due to the following reasons: ..."
In any case, I thank you again for that link and for your fine blog, on which I have found a large number of late 70's-early 80's releases, my original vinyl versions of which have long been lost: Vice Versa, Bouquet of Steel compilation, Crash Course in Science, etc. etc.

Thanks a lot for the Cabs stuff and particularly the Final Academy recording. I saw them at that, while tripping on mushrooms, plus the late, great William S. Burroughs. You just don't seem to get quality entertainment like that these days, more's the pity.

yep,sadly its all finished now.The only stuff thats interesting now is the past.We are in a comfortable post-rennaissance phase....we were lucky to have been young when it happened.

Mr Zchivago, thanks for this and all the other posts you've made here. Do you (or perhaps someone else reading this) happen to have the four tracks from the 12 inch 'Dance Like a Star' EP that were not on the Golden Hour of the Future CD? These four tracks (from the 12" EP) were: A2. C’est Grave; A3. Titled U.N.; B1. Dance Like a Star (V.2) [instrumental]; and B2. Treatment.
Anyway, thanks again for all you've posted!