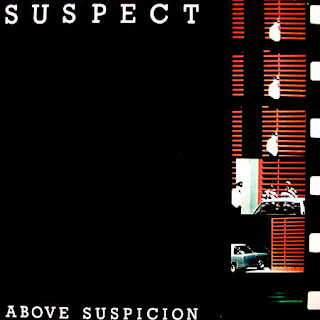 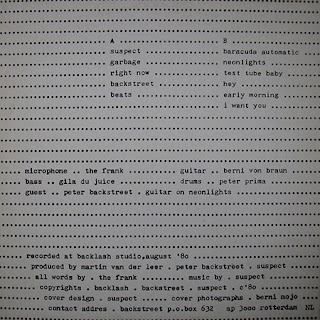 Before  Schlaflose Nächte were  Schlaflose Nächte, they were another Dutch/Kraut hybrid band, playing in a standard British Post-Punk style; which is infinitely preferable to the sterile Industrial Funk they ending up playing as Schlaflose Nächte.
Suspect sound as if they could have come from Bristol or Croydon rather than from Rotterdam and West Berlin.
Rather good.

DOWNLOAD without suspicion HERE!
Posted by Jonny Zchivago at 12:36

Oh wow.... And on Backstreet Backlash Records... Which was the record company from Peter Graute, who had one of the coolest record shops in Rotterdam way way back, end of the 70's, beginning of the 80's... I used to go there often, I was 14, 15.... Met the Gang Of Four there once, they were all wearing pig masks for some reason, the guys from Tuxedomoon hung around there all the time and Peter, he would come up with the weirdest records... He was also organizing concerts, some of those concerts I missed and I'm still feeling the pain, I mean, James White & The Contortions with Metabolist, early This Heat concerts....

He played guitar with Bunker Oeso, MU and loads of other bands, and here he's jamming with Charles Hayward in 2013....

Yeah, what would we have done without record shops and their owners?
I've got another couple of Backstreet Backlash lp's....a comp of Rotterdam Bands, and the MU album....i guess you already have them?

I only have the Rotterdam comp which is excellent, loads of old friends on that one :)

It's strange such amazing people could naturally conglomerate, through chance or limited coordination as they did in all these stories always. I'm not calling bullshit though. I am just realizing how uncool or unlucky I have been all my life. It seems like some animal magnetism was in effect or something. Tech is greater now yet it keeps us grounded down at home more often. Missing cool shit like this maybe! Oh shut it off then. I'm irie anyways plus it's my birthday!... forty minutes ago at least. Oh, man. I did nothing. :(