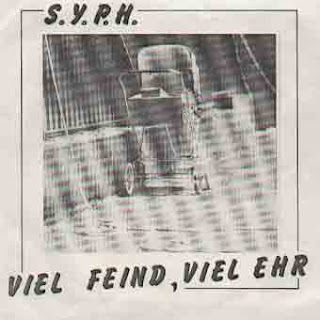 If there was ever a good reason for the UK to leave the EU(and there isn't by the way!),it would have to be the homogenizing of product names so they can be pronounced in all languages. So, all those classic British products of the seventies got their names changed. For example, Marathon became the awful "Snickers", "Opal Fruits" became the even more terrible "Starburst", "Oil of Ulay", became "Oil Of Olay"(!?), and 'Jif' ,the lemon scented mild abrasive surface cleaner, became fucking "Cif"!....which just so happens to be the way to pronounce S.Y.P.H. .....yes, 'Cif' not 'Jif'.
S.Y.P.H.themselves,not 'Cif',were an early German 'punk' group rather than a lemon scented bog cleaner, and they produced this very D.I.Y. sounding EP in 1979.It's largely a very rudimentary attempt to emulate a 'punk' sound, but with a hefty nod backwards toward the better 'Krautrock' combos, in what appears to be someone's living room.Track 1 has the classic white kids try to do reggae but end up with some completely abstract version of that lilting Jamaican riddim;like The Stranglers "Peaches" or The Clash's hatchet job of "Police and Thieves".Nearly every 'Punk' band made an attempt,but only maybe "The Ruts" could actually achieve it;maybe because they were secretly excellent musicians (Boo!).
I'm sure S.Y.P.H. is an acronym for something,and there were even tongue-in-cheek explanations put forward by the group;but the real version will probably remain a mystery......and so it should.

DOWNLOAD in a jiffy HERE!
Posted by Jonny Zchivago at 00:36

In France Oil of Ulay is "Oil of Olaz"

Well thank you Philippe from France for that nugget of consumer information.I live in France also, so i'll pop into the Super U (one of those terrible supermarkets) tomorrow and check this out.....i notice french people have trouble pronouncing "Bounty".('boonteh')...maybe that should be changed too? any more suggestions?

So i'll fit into this incredibly important namedropping and share that Oil of Olaz went by this had this name for decades and then they changed it unexplained into Olay.But more important,thanks for this single,there are versions that i did not hear before...

So,It seems that Oil of Ulay (uk& !reland), and Oil of Olaz (Deutschland),were both transformed ,as if by magic, into Oil of Olay!?...But in France i am assured that it is still and always has been Oil of Olaz!?.....in fact Bodhi, i have a cd with these tracks on and more from the same session that were never released? Called The Gravelsberg Tapes...are you familiar with this?

I'm very proud for launching this fascinating thread but it seems that alas you can't find "Oil of Olaz" in France any more, so Jonny don't bother looking for it at Super U, or Intermarché, or Carrefour Market...

And proud you should be philippe.....thanks for saving me from a fruitless search in the French supermarket system.Now i'll just restrict myself to the Lidl beer section.

In Germany we used the word "Siff" for Garbage, Dirt, Ugly Things that came from the "Syphon" (the part of the sink where the wastewater goes down and up again and leaving a mixture of hairs, soap, slime and other nice things, and from time to time you have to clean it). "siffen" also means to make things dirty, not taking care of holding everything clean, leaving a mess behind, etc, so everything gets sticky after time.

Well now I understand.....now the cleaning product makes sense too......its kinda spoiled it all for me!

Jonny,I have "Das Tönende SYPH Buch" (The Sounding SYPH Book)as a download from a german blog (not sure if it's the complete version though),where "The Gevelsberg Tapes " are included but until now i never got around hearing those,they are waiting patiently on one of my HDs,but i can't tell for sure since i don't have internet at home,i always use the super quick and reliable connection in our University (and it's for free!).So if you like to hear more of this stuff,i could provide a link to the files i have...

Can't believe there are so many men getting worked up over Oil of Olay!

Thanks as always Bodhi....naturally any links are welcome as long as its on topic.

Don't you people understand how important cheaply mass produced body creams are to us young ladies......that and obscure industrial cassettes.

The oiL of uLan/name change as above also happened here in Australia and probably over the ditch as well (NZ).

Oil of Olaz?!? My mum used to it and I always hated its powdery smell.
I prefer this here:
http://brotbeutel.blogspot.de/search?q=syph

Great blog as ever.
Thanks for your endless fun.
Best, Michael

As i am lacking the sense of smell.......eyesight and hearing now going too!....I cannot confirm the smell of Oil of Olaz/Olay/Ulay....but i did see it stocked on the shelves of a LIDL supermarket near me!....so, Philipe of France, it does exist in France after all!?

I remember Brotbeutal, it was a good blog that one.

Not sure about the S.Y.P.H naming explanation above. Though being from a city close to Solingen I never had any first-hand information about it.
I remember one spontaneous 3am jamming session during the summer of 1983 in Solingen @ Ulli's place where I tortured Michael Karoli's old Ampeg amp, but that was out of the blue and well before I even heard of S.Y.P.H and their portfolio. After quite some time I learned who they were and that they had strong ties with my hero Holger Czukay back that time (remember... that was in the pre-Google days!), but as there were no personal ties established I had no reason to follow up.

However I kept my ears and eyes open since then and found different critics musing about different origins of the S.Y.P.H. name: one was the "siff" term mentioned above, another related it to the standard SYPHilis abbreviation and yet another to "Saufender Yankee prügelt Homo" (= "Drinking yankee beats up gay")... the latter might stem from Spex, maybe even from Xao Seffcheque (who should have known), but that could be completely messed up memories.

Anyway: Thanks for the good stuff!