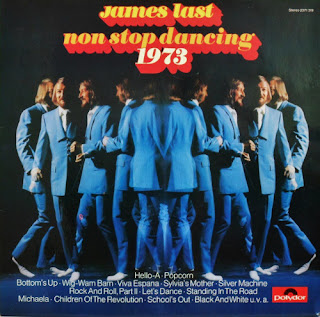 If there's one thing Germany does better than efficient transport systems, reliable cars, and......sorry, can't help it.....start world wars. It's 'prime cheese' like James Last, the Schlager king of Europe.
In the midst of all the inspid funk-less naff-ness, there were some moments of accidental musical subversion; a prime example being the opening medley of glam rebel anthems from the likes of Hawkwind,T-Rex, and Alice Cooper. No-one quite had the rare talent to squeeze every drop of Rock'n'Roll out of a tune like James Last.Draining all life from these mildly rebellious ditties with his vapidly anemic arrangements. This medley did far more to destroy the Rock monolith than Punk Rock ever did.The Punks boasted of making those Rock Dinosaurs extinct by, ironically, and falsely, as it turned out; playing 'Rock'?!......James Last did it by sucking out rock'n'roll's blood like a muzak vampire,and spewing it down the toilet of populism.Not that i can ever imagine anyone actually dancing to this, "Non-Stop Dancing 1973",(released in 1972...uh?), was basically a Schlager version of Yes's "Tales From Topographic Oceans", the end of Rock.......the death rattle being 'Punk Rock'.After that fizzled out in 1978, it was all showbiz from then on as intelligence went underground.
Hearing Lemmy's vocals on Silver Machine replaced by a limp brass section is nothing short of hilarious,beaten only by the cabaret club guitar solo,and the canned audience noise. It's up there with The Residents version of "Satisfaction" for anti-rock power. James also manages to murder the shit out of all my glam heroes. Slade, T-rex and Glitter all get the 'last'treatment. Alice Coopers' teenage angst anthem,gets transported, rightly, back into the silly showbiz bracket that Alice /Vince himself has inhabited since,well...since 1973!
This was intended as party music in the seventies(not that I'd want to go any party that played this in 1973) , for different reasons than it is now. Now it should be called "Non-stop Laughter 1973".
Thank you Germany for your continued atrocities against humanity like the musical Zyklon B that is Schlager!Sometimes we all need a reminder about why we had to go and do it ourselves and this is it! Accidentally great stuff.

DOWNLOAD two sides of schlager and a packet of crisps please HERE!
Posted by Jonny Zchivago at 14:50

Great upload, I've got a revived respect for Silver Machine.

Lemmy is spinning in his urn!

Praise be! It's on Youtube... "best thing they ever did" etc etc.

Yeah!...not only were they musical and cultural Zyklon B, they were Sartorial cyanide too......i'm only jealous.

Wow,i've never listened voluntarily to James Last in my whole life(apart from watching a documentary about his life and success),because he was inevitable to stumble upon looking saturday evening shows with my parents on german TV in the early 70ties.But now i will, looking on the featured medleys starting with Silver Machine and Children of the Revolution!
Thanks for this twisted gift....

It must of been about 73 that my parents dragged me to the Royal Albert to see Last and co.....middle class middle aged people dancing in the woods....maybe on retrospect it was this that kick started punk?

Too bad he never had a go at Krautrock (he didn't, did he?) I'm sure he'd have captured the Neu sound with no trouble.

Changing topic, have you got anything by Methods Of Execution? They put out a whole string of cassettes in the early days of the scene but seem to have totally disappeared from memory - not a word about them on Discogs, for instance. Admittedly the tapes I heard weren't very good, but it seems odd.

Thanks a lot for this hilarious comment, Mr Z, though some of your play on words will definitly be rejected as sacrilege by tasteful german pc squares...what make them even more enjoyable. I think the phenomenom Schlager (apart from those devastating 12 years)causes the discomfort german pop musicians still have with their mother tongue. The short time of the neue deutsche Welle probably was the only commendable exception. Today you will find either lame pop or annoying hip hop that makes you wish that they would speak some obscure asian dialect so that you only have to stand the mediocre music. It is a pity that this post gets more feedback than the ones of cool tunes by der Plan or Palais Schaumburg for example(thanks for the great singles by the way). At the end of the day it seems like James Last is the more radical artist I guess, haha!

Always had the feeling that he was a secret stoner and in later years a total coke head :)

There's also his 1971 album Voodoo Party which has it's moments:

I've been told that there are other albums that have some nice psychedelics on them but for the life of me, I can't be bothered to dig crates to find those....

I like the idea of James Last doing an easy version of Amon Duul 1&2.....the devils music if ever there was such a thing....but even in Hell you'd get to enjoy anything.You're there for eternity remember, hypothetically speaking of course.

I only have one Methods of Execution from the 21st century i think, but no early stuff.

There have been a couple of albums called "Methods Of Execution" by American bands, I think neither are connected to the actual band MOE who were from Peterborough. The other day I found an article about DIY tapes from an old fanzine called Smear which went to the trouble of slagging them off at some length.

By the way my own new album "Year Of The Black Fridge" will be out shortly!

I nearly bought a Black Fridge a year or so back.
Looking forward to it....there's a place reserved on my radio show for a track from it.

"the musical Zyklon B that is Schlager" Oh man, i really did LOL out loud at that one. But yeah, schlager records can be a real gas (see, now you got me doin it), not just Lasts'. I buy 'em sometimes- theyre always in the bargain bins. Got 1L

.
. where some schlager-meisters cover that Plastic Bertrand song that i dont know how to spell.

and James Last plays Classic , where he is playing classical tunes, 100% fun to sample (as I did way back when). I guess every country has its fair share of Lastst but not Leastst. In the Netherlands, a guy called André Rieu has his DIY, for just like Last, Rieu has his own orchestra backing him, so there is no fiddling about. I once sat through a concert (on tv) by him, and I think he is both better (fully qualified top musicians) and worse (what these top musicians play) then James Last. James Last destroys the dignity of living music lovingly, while Rieu rapes dead music.
There are some more names from the past that will be noticeable, Klaus Wunderlich, Fausto Papetti, Bert Kaempfert, and the dutch greatest Magic-Accordion player John Woodhouse

Its a dark kind of fun to imagine the James Last Orchestra in stripy pajamas as the official orchestra at Auschwitz......playing "Ça plane pour moi" as the inmates shuffle into the gas chamber.

Yes I've seen Andre Rieu on the TV, with his curly mullet hair,not only does he have the wit of a rapist, he plays his silly violin like a rapist too.......

I'm very aware of the depths of easy listening hero's, as i was obsessed by this stuff in the 90's.....looking for samples, then actually enjoying the records to the point that I never listened to anything else except 'Easy' and that 'Incredibly Strange ' stuff/fad.....i thought it was the 'Punk' of the nineties

Here in America few people knew about Last, since we had our own schlager kingpin Lawrence Welk, who brought the 1940s into the 1970s on a weekly basis with his horrible syndicated TV broadcasts. I'm wondering if Last & Heino ever recorded together?

Flashbacks to when I was a kid and my old man was always spinning James Last on the stereogram.