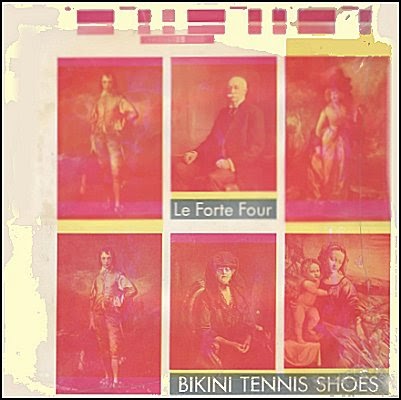 The first LAFMS release from way back in the lost year of 1975, was by early Potts vehicle, Le Forte Four. I wager that there was nothing quite like this on vinyl in 1975. Thirty half-formed ideas, mostly under a minute long,and quite a few under thirty seconds in length.An Electronic Musique Concrète sound collage of funny noises, studio buffoonery, and found dialogue, with a few rough jams thrown in for good measure. An abstract non-Music antidote from the era of “Tales of Topographic Oceans”.
Were these guys on drugs?......er Yes......as in Yes(the prog criminals), were;....the wrong drugs!

And I thank you Stevie D.And yes it is.

thanks for this! i love it...do you have access to the very diff. to find Doo-dooettes & Le Forte Four Live at The Brand? I would love to hear it......thanks for everything. This blog is nothing short of amazing~

Hi Kevin, yes it is amazing, and yes I do have live at the Brand.....will post a download link here later today for ya.

fabulous! thanks so much