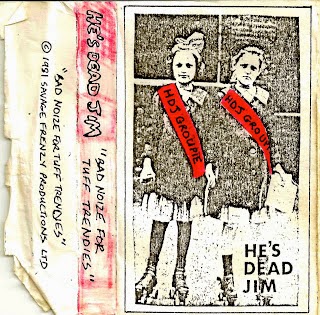 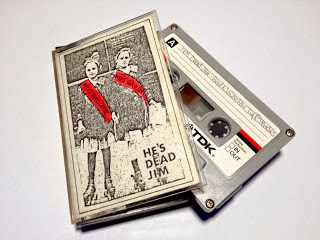 HDJ’s first release from the garage is thee ultimate 80’s lo-fi fuzz punk cassette classic. This recording has the best fucked up fuzztone guitar this side of 1960’s technology. Mix this up with some punk influenced melodies,lo-fi sci-fi, a sense of humour, and you get a heady cocktail of DIY garage punk rock. Thank fuck these boys were never allowed near a proper studio! I dread to think what Martin Hannett would have done to them.
Instead, glory in the raw dissonance of this carbon monoxide fuelled smog fest, and wonder at its simple genius.
As a bonus, you also get no less than four versions of the eponymously titled “He’s Dead Jim”, where the lyrics are wholly made up from titles of Star Trek episodes, from the days when ,thankfully, there was no ‘Next Generation’! Which is apt indeed, because was this part of the last generation of the rock age?

Neil Christie (HDJ) fills us in on some of the finer details behind this recording:

"This was our first cassette, from 1981, recorded within weeks of most of us (apart from lead guitarist Neil "minor chords are for girls" Smith) picking up an instrument for the first time and released in small numbers under our own 'Savage Frenzy' imprint. What you hear is a combination of ham-fisted thrashing, sub-lo-fi recording and hoarse screaming. We didn't have a microphone or PA, so vocals were simply shouted above the noise. The borrowed drum kit had no bass pedal, which made for an idiosyncratic approach to rhythm. The guitars were channelled through knackered amps and usually further distorted by the use of the 'Big Muff' fuzz pedal."

DOWNLOAD this bad noize HERE!
or
DOWNLOAD from here if you're a real tuff trendy, it's on google drive.
Posted by Jonny Zchivago at 21:27

Any idea where I can get this Jonny? The link is broken, but I don't want to put you to any trouble. An internet search reveals absolutely zero.

Ahaaaa!...can't get this anywhere but here mate.
I will re-up it for you.
What a service?
JZ

Link seems ok to me in fact....keep trying it, eventually mediafire works. Will stiil reup to an alternative source however.

Many many thanks JZ. Above and beyond the call of duty as always. For some reason chrome and chrome os don't like Mediafire. I'll maybe try firefox in future see if that makes a difference. Cheers mate.