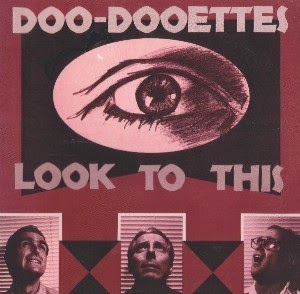 Another strange group of LAFMS collaborators is The Doo-Dooettes, who seem to crop up in many bizarre places.
The music is a disparate mixture of modern composition, free improvisation, musique concrete,and Avant rock. Highly experimental indeed, shifting from one end of the musical spectrum to the other in the space of thirty seconds. Never a dull moment on this endlessly innovative,beyond fine album.


Elaborations:
A1 - this is the music from an Italian film entitled "Zombie", this version is the 'Ettes testimonial to horror.
A2 - recorded live on KCRW, Los Angeles; 3AM, April 4, 1982, on Brent Wilcox's "FRGK" program.
A3 - this is an excerpt from a longer piece, presented here is the first ten minutes; no overdubs or edits.
A4 - no comment.
A5 - environment created live entirely by mouth and limb.(runs off into a lock groove).
B1 - this piece grew out of an annoying song Dennis used to play incessantly whenever he encountered a piano, by recording it in the studio and making it a big number we hoped we would cure him of the habit. It worked.
B2 - after working on "Zombie" in the studio and dealing with all that structure, we had to flex our improving muscles. Dr. Phibes was the result. If you listen carefully you can hear him speak as he arrives in town.
B3 - a condensation of 20 minute piece down to about three. A random sampling with flavor enhancers by Tom.
B4 - excerpt of a piece used by Doug Henry in his film of the same name. Title courtesy Doug.
B5 - our version of "Nights in the Gardens of Spain"?
B6 - is not listed on the cover or labels, only on the insert. this tracks starts at the end of the side and run into the lock groove.

Doo-DOWNLOAD from this look HERE!
Posted by Jonny Zchivago at 09:45

The strength of this release is undeniable. Funny for a grassroots DIY affair... this is technical proficiency at Picasso levels of deconstruction. Thank you!