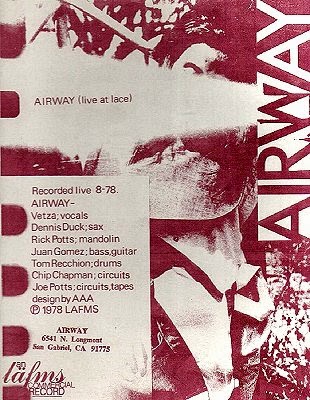 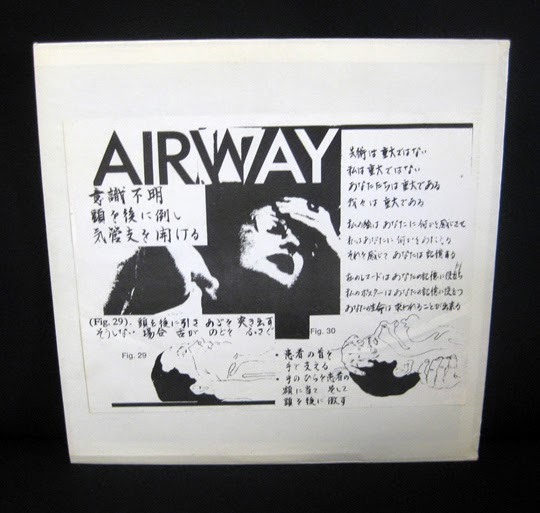 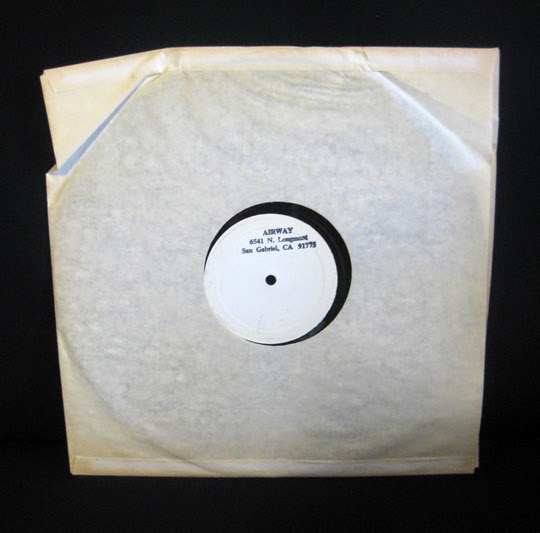 The Californian equivalent of the Manchester Musicians Collective and London Music Collective, was the more intelligentsia populated Los Angeles Free Music Society. As the quote above reads, the music was Free, in all meanings of the word, but the product wasn’t. Which fits the criteria of this blog nicely, for there is No product here, just music, and its all free.
The first selection from this hopelessly obscure bunch of artists and experimental musicians is by the Free music monolith that is Airway, that included two of the society's mainstays Rick and Joe Potts.
Never to my knowledge captured in a studio, Airway stuck to creating a sonic whirlwind in live environments, such as The Lace Art Gallery, where this performance was captured in 1978.
Half an hour of recreating the conditions on the edge of a hurricane.They attempted to create subliminal messages beneath a continuous barrage of sound.Dunno what these messages were, or how successful the results,but this was common practice at certain 'Rock'n'Roll' events*. This is Noise without rules, except that there are no rules. There are moments when it all sounds like a close miked liquidiser, other moments when it could be a Dyson dual cyclone vacuum cleaner on max strength; but that only brings us back to Hurricanes, so i'll end the hyperbole's, and just simplify it by stating that its just a fantastic noise.

* I once sold a multi-track recorder to a Hypno-therapist ,back in the 80's, and he told me of an incident at a (omg) Cult gig,to which he had accompanied his son. Bored by the exceedingly crap music, he decided to take a look at the sound desk. spotting a reel-to-reel tape deck spinning by the mixer, he asked what was that doing? "I'm a hypno-therapist and do i suspect subliminal messages?" Caught red handed, the sound-man admitted that they were using subliminal suggestion, for the purpose of, not getting the kids to buy their shit records; but to act violently, to butch up this awful goth rock for the media!
Mind kontrol exists, even by and for Goths!?

Track Listing:
Side a Untitled
Side b Untitled

DOWNLOAD live from lace HERE!
Posted by Jonny Zchivago at 18:47

I love the Potts!

I posted the LAFMS 11 disc retro a while ago. I think that the links are still active (?).

I think that mind control for goths stops and starts at their own mirrors!

i used to go to a shitty basement dive in Manchester called "The Banshee" (had some great nights there to be honest). Whenever the mission was due to be played, they would all prepare in a circle and then do their wavey hand dance. I'd weave in and out of them screaming the words to the Butthole Surfer's Human Cannonball ... never got a response!

mind you, now we have grown up goth activity like Columbine ... damn you Ian Astbury!!!

Yes, i'll admit to being a Goth girl stalker. We actually had Batcave nights in Leicester,an outside London venue for Alien Sex Fiend and cronies.
I, of course,looked more like a creepy bank clerk than Andrew Thingy from Sisters of mercy, and rarely copped off.
Although, my missus was one of these gothesses.....so, yes, damn you Astbury!

The LAFMS crew still play around town, and an enormous all-hands-on-deck line-up of Airway are playing this June 21. Pack yer bags, Jonny!

My bags are packed but my wallet is empty.Stripped clean by the austerity tax men of the peoples republic of France.
They definitely mean equality over here.
I shall remote view the Airway performance instead.
JZ