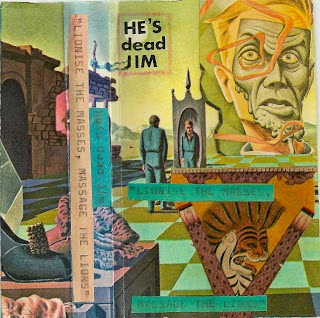 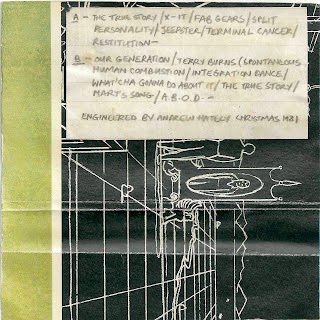 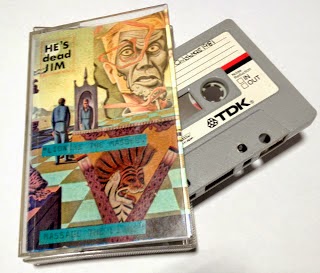 Lets change direction back to something a bit more pop orientated, where 'proper' songs roost.
so we switch from the sun-kissed beaches of California to the jolly grey skies of bonnie Scotland.Indulge in some classic UK DIY, and cleanse your mind from all this avant garde nonsense.
Here's Scotlands answer to  Airway(?)....yes it's He's Dead Jim!

As the Subway Sect had a disproportionate influence in Scotland, after their sojourn north of the border as part of the White Riot Tour in 1977; one thought it apt that we are now exposed to some classic scottish DIY Punk. That said, it was brought to my attention that the 'Sect Effect' only centred itself around Glasgow, Edinburgh and the general M8 area. So naturally, we go to Aberdeen, where we find "He's Dead Jim" grinding out sub lo-fi punk pop classics in their garage. Plenty of weedy Ron Asheton riffs, Swell Mapisms, and a sense of humour; this home-made classic could have been massive had it been  from 1981's fashionable place to be, Edinburgh. Not bad from, as Neil Christie of HDJ said,"(for)unquestionably Aberdeen's fifth best garage band of the early '80s."

He's Dead Jim has the honour of having a compilation Cd-r of their cassette greatest hits released on the great Hyped2Death label.....you can buy it HERE!

" Lionise the Masses, Massage the Lions was recorded late 1981.

It features the original line-up, struggling with our equipment and incompetence.
It was recorded in the garage, in mono on a reel-to-reel machine and distributed in very limited numbers to friends and 'fans'.
The garage had a large metal door that reverberated as the volume increased and I like to think gave the recordings a uniquely harsh metallic edge. The neighbours enjoyed our practising so much that they complained to the council and got an injunction for 'noise pollution' to stop us from rehearsing. It was inconvenient to be shut down by The Man, but we were delighted to be officially classified as 'noise pollution'. That seems like a pretty good genre name for what we did."

DOWNLOAD this diy guide to lion massagerie HERE!
Posted by Jonny Zchivago at 21:24

No probs Neil, but I do seem to have mislaid A World of Violence, the live one. Dunno if you fancy uploading it again? Or should we leave them wanting more?