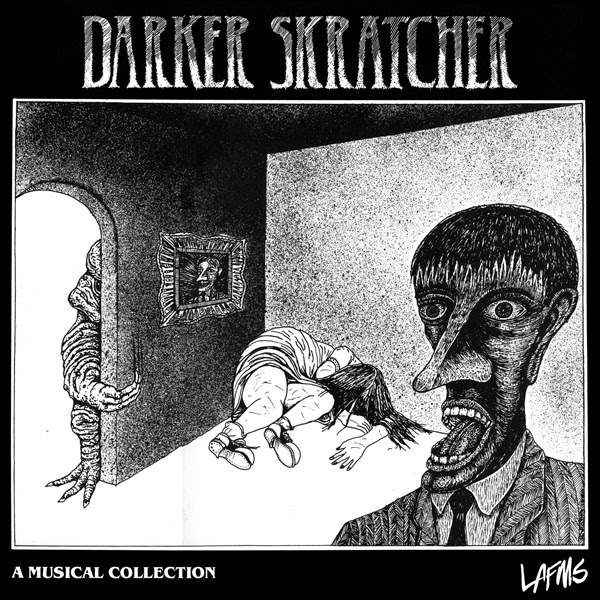 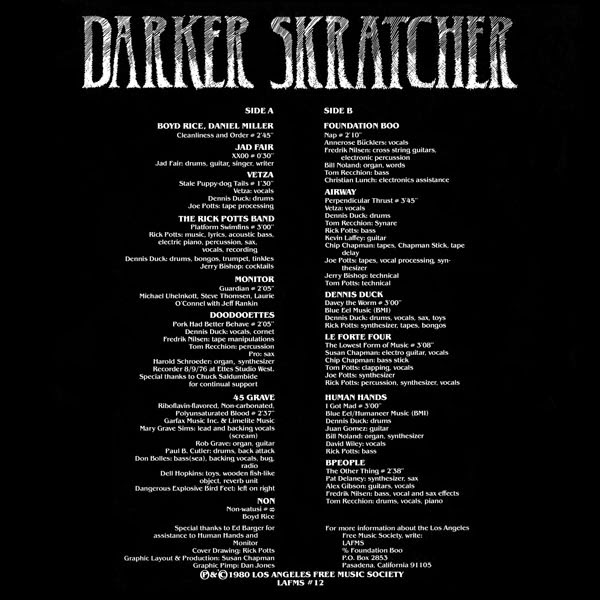 Classic American underground compilations are rather thin on the ground,but probably the best of them is the Los Angeles Free Music Society's “Darker Skratcher”.


It starts off with a bang, thanks to Boyd Rice and Daniel Miller (Non and the Normal), and a Rosicrucian Temple record set to a minimal electronic backing track.The Rosicruscian's were a quasi-religious sect who made records to hypnotise our children into good,clean, citizens.The best Boyd Rice track ever,and the second best thing Miller has ever done.(Don't ask what the best track by The Normal was!)


Other highlights are the Monitor track, 45 Grave's ,before they got too “gothy”, dark poppy effort,DennisDuck's Davey the Worm,and the repetitive synth-punk of Human Hands.


Amongst the more accessible material we get the usual bizarre mixed bag of strangeness from the usual LAFMS regulars, and a standard modern primitive outing from Jad fair,of Half Japanese 'fame'.


A hugely entertaining underground Californian variety show,and a great introduction for the uninitiated, into the murky darkly scratchy world of the Los Angeles Free Music Society. Enter at someone else's peril,because you won't regret it.

A tear of petrol is in your eye.
The hand brake penetrates your thigh.
Quick, let's make love before you die

Always liked "Mode Of Infection" myself.

I've got a flyer from 1979 for a show by The Fall in California, with Non and Human Hands as support. 35 years later I've finally heard Human Hands!

Non Human hands would be a good band name.

I have difficulty imagining The Fall in California. Bit like a stray mongrel in the best of breed show at Crufts.

Thank you for all this LAFMS stuff, it makes me proud to like in LA. Do you have the "Lowest Form Of Music" compilation by any chance? That would be an amazing post.

Bleak Bliss had it,but the links are dead.You can always ask him to re-up it?
http://bleakbliss.blogspot.fr/search?q=lowest+form+of+music

Hey Mason, i remember it was on Willard's Wormholes,went to look,and the site's been taken down by the man.
BUT......i've found another active download here:
http://experimentaletc.blogspot.fr/2010/05/va-lafms-lowest-form-of-music.html

Its on deposit files, so its a bit slow,but it works.
Enjoy.

Ah, yes... Thanks! That one looks like a lot of fun, but I could never find it anywhere.

BTW, "Davey The Worm" is incredible.

You are my hero Johnny.

I would be if they worked,but they seem to have expired! The deposit files ones work though.