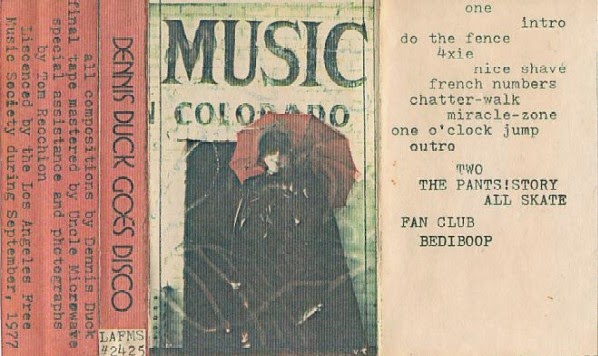 Dennis Duck, drummer with the Doo-Dooettes (fuck me, he was also in the incredibly normal Dream Syndicate?!) invents turntable-ism, plunderphonics, and sampling in 1977.Probably pushing it a little bit,but there are elements to this cassette release that were unique to Dennis Duck(Dennis Mehaffey) before ,and including ,that great watershed year. TheResidents did similar things pre '77,not strictly sampling ,but this is twenty years before Plunderphonia had a name.Not to mention, Holgar Czukay and Rolf Dammers experiments in found sound from the late sixties.The extensive use of a turntable pre dates Hip-Hop's abuse of said tool,by a good four or five years however.


Incredibly inventive, this tape doesn't lack a sense of humour. The Disco in the title, obviously refers to the abuse of vinyl discs rather than anything to do with the biggest selling musical craze of 1977. All the tricks are used, 78,45,33,and 16 rpm, using the cueing lever to create repetitive lock grooves; random stylus placing;mixing two decks together; all this utilising a stack load of unwanted thrift store records,which would have been mega cheap in 1977, but are now worth a small fortune; like this cassette?

DOWNLOAD some disco music to sit down to HERE!

Thankyou JZ, as ever.

Best blog on Earth. Top 2 anyway. (Will start quest for the other one now.)
World leaders should be bribed/blackmailed to force-feed all this awesomeness to our future the children.

Cheers, Belgian Bloke.
All the decent blog's have stopped nowadays. No-one writes anything amusing or interesting.
Creepscanner was my favourite.
Bleak Bliss is a good one though.

World Leaders should be "resettled in the east", to use a certain political movements newspeak.