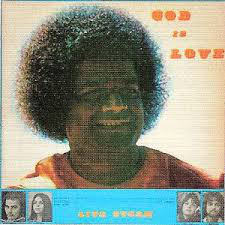 I fear we must return briefly to Religious Exploitation,but with a psychedelic flavour, with this tribute to Christ reincarnation and kiddie fiddler, Sai Baba.(Checkout one of his fabulousy creepy albums HERE!)
What did Kali Bahlu do after her supremely child-like psychsploitation album "Cosmic Remembrance"? You have no doubt been asking yourself? After much tossing and turning at night, Sai Baba sent me the answer from the child abusers Hell he now finds his soul trapped in.
Kali Bahlu, or Kallasu Wintergate,was in a Psychedelic Xian duo with her husband John Wintergate or Johnima .P Bahlu, called 'Lite Storm' ,stupid!
I think they like Sai Baba.....a lot. What their thoughts on said cult leader today are not known;but they've dedicated a whole album dedicated to praising this now deceased God on earth,complete with Afro.
Kali, at least seems to have matured as a singer since the 'Cosmic Rembrance' album,and is far less irritating on this outing.If you can see pass the obvious madness, this is actually a pleasantly weird record by this folky twosome.Oh they're soooooo 'Happy'!?
Om Shanti.

DOWNLOAD some love HERE!
Posted by Jonny Zchivago at 10:23

This album reminds me of the Manson family as portrayed in Once Upon a Time in Hollywood... peaceful & loving on the outside, yet at the same time sinister in a way that's hard to immediately discern. At least with Father Yod & the Source Family there was no question about what you were getting up front.

Would you happen to have their other LP? I can't remember the name, but it's a bit more rock & roll than this one. And thanks for the heavy trip, man.

Yeah i got "Warning",their first album,it is standard c-list psychedelia...i don't think Kali is on that one.
If you want it i'll upload it for ya.....they actually went Glam around 1980!? as 33 1/3.
There's some nutters out there thank god!.....hey i just got called an 'Idiot' by one of David Koresh's surving kids.....check out the comments section for Voice of Fire-the complete David Koresh.
Nice one.

Yes that's the one I was thinking of, would be great if you could, many thanks. I remember reading somewhere that Kali and Lite Storm toured in Vietnam to entertain the troops (or maybe it was reverse psychological warfare) in the early 1970s. And they did a horrendous techno cover of Zeppelin's Whole Lotta Love at some point in the 90s.

You said his dad was better than Steve Vai and he's mad at you? What kind of gratitude is that?

I'm surprised that the troops didn't start loving their enemies after hearing the Bahlu's.....either that or start killing themselves?
I'll do "Warning" in the morning. Will post link here.

Yeah I know, these sole surviving children of monsters are so ungrateful.