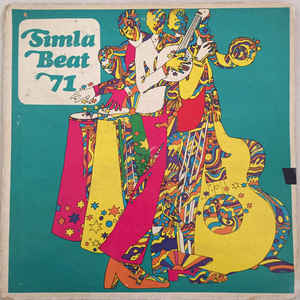 The notes on the back sleeve are as priceless as the charmingly feral music....dig this:

"It's been a long time away. Yes, pop music's really leapt bounds from those way back days of Bill Hailey and His Comets. Remember?
A lot of sound has blown since. The Beatles came, took over the scene, then split into bits.
Janis Joplin toppled out as the Queen of White Soul. The first one ever. She flipped out 'tripping' and never came back. Jimi Hendrix bludgeoned into focus. Then turned within and died too.
But a lot of men didn't. Bob Dylan's changed his music, his songs, his message. The Rolling Stones are much together. Hundreds of new groups, several new traditions, a series of revivals and refinds (B. B. King, a great one) have happened and are happening still.
Pop music is India began by being derivative. There's a lots of that still. But there are more Pop Groups here now than ever before. What's a new turn is there's heaps of original work. Much of it worth the world pop scene. Beat shows gell more often. Groups deal out music more seriously. Commitment. And heavy involvement. And backing the growing pop music scene in India is India Tobacco Company Limited. By sponsoring the biggest annual pop music happening- The All India Simla Beat Contest. Last year it was great. This year even more. And this is only the start...
Now over to you and the winners this year. All featured on this L.P."

The India Tobacco Company were not satisfied with sharing out as many carcinogens as possible to the youth of India,they also provided the only opportunity any of these sub-continental Psych groups had to ever appear on vinyl.
Here are the 1971 Simla contest winners for your much needed course of psychedelic radio therapy.

It's great that the ITC got the fake-Sikh locals-gang-master off 'It Ain't Half Hot, Mum' to do the sleeve-notes.

Thanks for all the wonderment

Gawd Blimey i am thanking you mem saab.

Hello Jonny. I am working on documentary on old Bangalore and a good part of it focuses on the psych music of the late 60s and 70s. I am looking for as much information as possible. Can you help me out!?