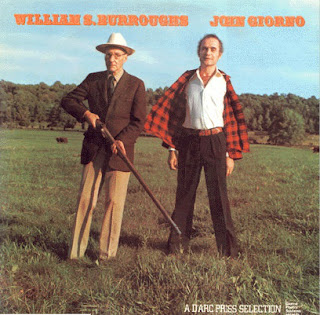 The only Americans that ever came near to matching Dr. Feelgood for sartorial elegance had to be John Giorno and William Burroughs. A fine example of their peerless fashion sense is proudly displayed on this great cover shot on their shared double album on Giorno Poetry Systems. They look like a couple of characters who might have known Frank Booth from Lynch's 'Blue Velvet'. "So Fucking Suave",says Frank as he checks out Giorno's inelegant taste by-pass apparel.
As for Burroughs, I reckon he came out of the womb looking like an old bloke.....he'd be known as 'the Old Man' in a David Lynch movie,sitting stoically at the head of a table drooling and barking unintelligible orders while eating a cut of fly-infested unidentified meat,that suggests human flesh.
Giorno contributes his usual,confusing rants,with the same words echoing from each side of the stereo spectrum. One of the tracks is 30 minutes long, which would even test the patience of Buddah....and certainly empty most any pub or party,and isn't recommended for depression councilling.
Bill gives us yet another chance to hear his greatest hits, Ah Pook ,Green Nuns, and the classic 'lets get us some civvies' monologue from Exterminator....after all, "What the bloody fucking hell are civilians for?".....by the audience noise on the live parts,its to sit in reverence to listen and laugh at readings they've heard hundreds of times before.
Happy Valentines day?

DOWNLOAD and lets get us some poets HERE!
Posted by Jonny Zchivago at 08:19

The outfits. That was my first reaction. You never expect a badass to wear synthetic slacks. "society is a hole! Authority bites! But hey, these pants are really cozy..." And the comparison to Dr. Feelgood. I spilled broth all over my leisure suit.

Jonny
A plethora of pamphlets have been posted from Scotland and should be arriving in Zchivagoland soon.
Shug

JZ: the file contains the Burroughs material only (A + B)--is that on purpose?! Not keen on Giorno, personally, but wondering.

Perhaps it is worth pointing out that the Burroughs material on this record was recorded in 1974 and 75. These performances were the first instances, if I am not mistaken, where American audiences could listen to WSB read from his works. (After several years in London WSB had moved to NYC in 1974.) . Ginsberg had talked WSB into giving public readings, not the least as a source of income. As the pieces contained here indeed are among his greatest hits, WSB went to on read many of these "routines" for the next 10-15 years, which is why they seem so familiar to us now.

Thanks for posting all the Giorno Poetry Systems releases! In the mid-1980s my bleak, bleak, BLEAK hometown (Hannover, Lower Saxony) had, to everybody's surprise, a record store with a huge import section. I recall sweating over many of GPS LPs, really struggling not to spend big deutsch marks on rather expensive records of poetry, most of which I would not have been able to understand at that point.

JZ, ignore my response re: missing Giorno tracks; there are in the RAR file, but it extracts into two separate folders ... all good.

Looking forward to that plethora Shug.

@albrecht....my automatic filing system got confused,is it a compilation, is it under various artists,is it the dial a poem poets? Computers don't understand these things,and i couldn't be bothered to sort it so two folders in one is what you get.