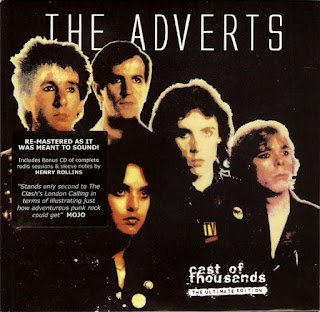 Another endlessly interesting and debatable aspect of the Punk Rock Explosion,is the seeming inability of any first or second wave group to actually expand upon the theme."What do we do now?"
A clutch of what, at the time, seemed like bloody terrible albums, were squeezed from between the butt cheeks of the new wave of Rock'n'Roll. A question as contentious as the "Who invented the Punk Rock" dilemma,is "What was Punk after Punk"? If you were The Buzzcocks or The Ramones it meant carrying on doing the same thing over and over again, maybe write the odd longer song,but they painted themselves into a corner. If you were The Adverts it meant getting a classically trained keyboard player to clunk away, Elton John and his fat stumpy fingers style, along with the newly penned two chord blunders from the gifted pen of T.V.Smith.Thankfully the record company didn't supply a string section,but the key-bored player had a polyphonic synth to supply a subtle wash of horrible string sounds. This difficult second album has,like a lot of prog albums, that lingering foul taste of the failed musical about it. However,as fan-bloody-tastic "Crossing The Red Sea" was,things were moving fast in the direction of experimentation for Punk's derocked  children in what is now referred to as 'Post-Punk'.Back then it was all thoughr of as punk proper...was it not?
The Pop Group, Gang Of Four, PiL,etc had kicked the chair from under the phenomenon that made all this possible,and the first wave survivors were dangling from a rope  after being caught in a post-punk pincer movement.
Despite wishing I was going out with Gaye Advert from beyond the first singles time, before she started getting constantly drunk and putting on the weight, one had hardly noticed that the Adverts had released a 'second' album,which upon leafing through the 'A' section in our local secondhand record emporium,
I had stumbled upon. I had heard "Televisions Over", and thought it was certainly rather splendid lyrically, but sounded a bit dodgy,like it had been recorded in a damp cardboard box.The drums sounded like cardboard too,and the guitar had all the bottom end and top end taken off,leaving this mid-range mud as the backing to Teev's impressively impassioned vocals....and it was so slow that it had got stuck in it's own mud.
Maybe the album was different?......turns out it was worse!/
As we now know, Timothy Smith is a rather fine wordsmith, and the words and tunes on "Cast Of Thousands, crackle with spiteful cynicism , the trouble is those dreadful keyboards.Be it a failed attempt at musicality,or to be taken seriously,or a desperate attempt to appear to be moving forward.....I dunno!? The trick was not to go forwards but to turn left or right,and whip out the oblique strategies cards.
Its another album that needs to be drastically re-mixed by someone who knows about EQ. The guitar needs re-recording, even though Howard Pickup is probably the worst guitarist in the Punk Years, which is indeed some kind of honor.Maybe they had it in mind to record Howard's parts again, but gave up the idea after he left rehearsals one day,said see you tomorrow,and was never seen again!
Of course Super-Fan of virtually everything that ever existed, Henry Rollins, is constantly ejaculating superlatives for The Adverts, saying stuff as if channeling the scriptwriter of Fast and Furious 79 million.Such as (I'm making this up by the way)This album kicks serious butt like a nuclear blast in a sea of napalm, or equally silly words to that effect.
The fact is this album sounds like having a couple of pints of mud poured in yer ears, but I've grown to love it like a disabled child.....I now adore the sludgy guitar sound,and have zoned out the piano.I even like the flaccid wet cardboard sound of the drums?,,,,you can get to like most things if you dump your conceptions and preconceptions down the shitter. I need to like this album more than anything,the songs are badly recorded classics,but they remain classic....I surrender (my fav hymn to apathy ever),its flawed, killed off one of the best groups of my Epiphanal years ,ended Gaye's musical career,but ,like an ugly girlfriend you've  grown to love , I've....er...grown to love it.
The radio sessions included here,are a short but imperfect glimpse into what might have been. For the "Cast of Thousands" tracks a better production job clears away the dirt slightly,just as you'd expect from the BBC,plus a couple of tunes that TV would use for the much hyped Explorers album,which also bombed.However the classic session tracks on the bonus disc,tend to overshadow the later material somewhat unfortunately.....as they would for most Punk tunes.
The Adverts were a great example of how you could do Punk without going Metal.Mainly because they couldn't play their instruments...for real this time instead of a stunt by a svengali shop manager.
Tim Smith would persevere over the ensuing thirty plus years,to now be a big draw as a solo artists with his intense one man shows....its never too late.
Tracklist:
Cast Of Thousands:
1.1 Cast Of Thousands
1.2 The Adverts
1.3 My Place
1.4 Male Assault
1.5 Television's Over
1.6 Fate Of Criminals
1.7 Love Songs
1.8 I Surrender
1.9 I Looked At The Sun
1.10 I Will Walk You Home
Bonus Tracks:
1.11 Television's Over (Single Version)
1.12 Back From The Dead
The Complete Adverts Radio Sessions:
2.1 One Chord Wonders
2.2 Bored Teenagers
2.3 Gary Gilmore's Eyes
2.4 Newboys
2.5 Quickstep
2.6 We Who Wait
2.7 New Church
2.8 Safety In Numbers
2.9 Great British Mistake
2.10 Fate Of Criminals
2.11 Television's Over
2.12 Love Songs
2.13 Back From The Dead
2.14 I Surrender
2.15 The Adverts
2.16 I Looked At The Sun
2.17 Cast Of Thousands
2.18 I Will Walk You Home
DOWNLOAD the lost chord wonders HERE!
Posted by Jonny Zchivago at 23:39

IN THE END PUNK WAS A MOVE FROM KIDS THAT WERE GLAM FANBASE. SO, WHEN THING CALLED TO, THEY DID WHAT KIDS DO UNDER PRESSURE: TURNED TO THEIR FATHERS. OR IN THIS CASE, BECAME GLAM. WHO WAS WISE TOOK THE MANTLE OF THE TIMES AND TURNED TO THE GLITTER BAND BEAT FOR SAFETY. OTHERS, LIKE THE ADVERTS, TRIED THEIR HAND AT STEVE HARLEY AND PERISHED. IT WONT MADE EM BAD, AND, AS I HEARD IT DECADES AFTER THE FACT, I LIKED THE ALBUM BY WHAT IT IS AKA SOME GREAT SONGS WITH A LOUSY PRODUCTION. REMASTER DID WHAT COULD HERE, SO I JUST CALL THE UGLY GIRLFRIEND ANALOGY AGAIN: ITS COMFY TO SLEEP WITH, GOT HIS THOUGHT IN LINE WITH MINE AND WE BUILT A HOUSE TOGETHER. SO I DONT CARE WHAT THE CROWD HAS TO SAY...

This and the Damned's second are a whole lot better than the current shite flooding the charts for the last thirty years.

I always unironically liked this album and like you can usually tune out the piano parts. I think adding a keyboard player would have worked if it had been someone like Una Baines instead of this lounge band John Tesh bloke. He needed to be as incompetent as the rest of the band.

Ha! Endlessly debatable indeed. I think The Slits and Wire expanded into some pretty interesting territory but let's face it, it's a pandora's box.

Hmm, i think the Slits qualify as the makers of a dodgy second album too.the Return of the Giant Slits is pretty bad.
But Wire are beyond criticism.

Ramones: We're in a rut.
Sire Records: Ok, we'll get you Phil Spector.
Ramones: Now we're in a run with an echo chamber.

Ramones: we're in a rut,we can only rewrite Blitzkrieg Bop so many times.
Sire Records solution: rewrite it again 12 more times and we'll get the most minimal producer we can find...I know,get me Phil Spector.

Ahh...its good to hear dissent when it comes to the fucking Ramones.
I remember the first time i heard the ramones, which was after i heard the pistols dsamned clash, i could believe it some kind of badly produced metal band crossed with the beach boys,who looked like they were some kind of weedy bikers pretending they were from "the Streets". Obviously inspired by glam more than the MC ducking 5,they were a joke taken far too seriously by the Bohemian set in downtown NYC. I can't recall anyone walking around looking like the Ramones anywhere...ever!?....also, i bought a heavy vinyl version of the first album and was amazed that this was ever regarded as 'Fast'...that means ELP must have played at funeral pace? They said nothing,a fun band like the Damned...but slower, Nah, the Ramones were boring and sadly a lot of 2nd wave punks took the music as a template...but noticeably not the look....protopunk, like the runaways were.


I don't care what they told you
This stuff is relevant