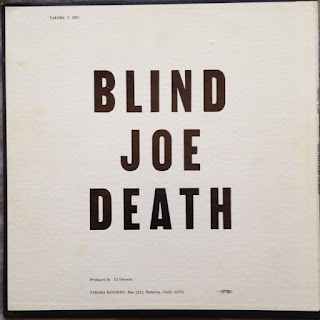 Henry Flynt was not the only minimalist on the block searching for the american primitive within. John Fahey made a consumatly ignored career out of it. Inventing a fictional alter-ego called Blind Joe Death,posing as a forgotten folk/blues musician from the twenties.After recording an album for his own imprint called Takoma Records after his home town,in 1959. He attempted to sell these albums himself. Some he gave away, some he sneaked into thrift stores and blues sections of local record shops, and some he sent to folk music scholars, a few of the dumber ones were even fooled into thinking that there really was a living old blues singer called Blind Joe Death.
In the fifties there was a record collecting trend towards old blues and country 78's from the twenties and thirties,so collectors were desperate to find undiscovered classics before their hip mates did.
John Fahey provided this convincing facimile for this burgeoning market,eventually selling out the first pressing of 100 discs three years later.So there would follow endless editions of Blind Joe albums troughout the sixties.....this is a CD version just in case you're wondering.
Fahey made several more albums under his alter-ego's name,and moved to San Francisco to check out the post-Beat, proto-hippie music scene, loathing in particular the awful Pete Seeger–inspired folk-music revivalists with which he found himself classed alongside. Fahey then moved south to Los Angeles to join UCLA's folklore master's program,incredibly,or, un-credibly, and received an M.A. in folklore in 1966,with a thesis on Charley Patton.Yep, he was qualified in Folk music!?...not sure if that's possible is it?
Before hitting the bottle, Dr.John M.A. made a few mildly avant-garde albums in the later part of the Sixties, including a lost album with the Red Krayola,that got binned by the record company....so that one must have been good?
After losing everything due to alcoholism, he was 'rediscovered' in the ninieties,making a few experimental avant-folk albums,and could often be seen adorning the cover of The Wire magazine.Hence new copies of 'Blind Joe Death' albums started appearing on white collor coffee tables all over the more comfortable parts of NATO subscribed countries and beyond.
Although his zeal and puritanism is admirable, i personally find these instrumentally forged folk/blues albums boring as fuck.
Yeah, great authentic finger pickin' technique, but i alway nod off when trying to get why he's so esteemed in such circles.I prefer Jandek myself.Fahey's qualifications are impeccable,but,i'm not sure Folk should be taught in Universities;its like an early version of that shameful Brits academy in London which churns out terrible production line pop stars,like Adele,who's been bangin' on about her boyfriend troubles for about a decade so far.
I'm thinking about doing a doctorate in Punk Rock too......Not!? Could certainly lecture on the subject if the money was right,but under my auspices, accepting money for such an anti-punk thing would be against the meaning of life the universe and punk rock!So such an idea would inevitably disappear up its own arse should it not?
Same goes for Folk, of which Punk Rock is a close relation.Discuss.

DOWNLOAD the great folk'n'roll swindle of 1959 HERE!
Posted by Jonny Zchivago at 09:43

man i agree............i've given fahey a million chances, and he always leaves me cold. I saw him perform outside in lincoln nebraska as a teenager...he fell off his bench onto the grass while playing, which i quite enjoyed. There were very few of us there to watch him.

Always liked Fahey myself. More so for what he did with the Revenant label which introduced me to some wonderful music with the American Primitive Compilations and the posthumous Charley Patton box especially.
I've always felt that Fahey loved the musicians he wrote about so perhaps I think your critique is a little harsh. Fuck it anyhow, it's a great blog you've got there and if we all agreed, all the time, it would be a funny old world eh?

Indeed Nick,harsh is my middle name, i did however go through a phase listening to all that american primitive stuff,and due to its DIY importance, I will be attaching some renowned compilations to show the real thing....Dock Boggs an' all.

I too Kevin, he fits in that awkward category of artists i've tried to get into,buying the same album more than once after selling it...now struggling to think of any?..er...Wire's Pink Flag except for 12XU of course(one of thee most influential tracks ever or what?)....i bought Bad Moon Rising by SYoof three times,and i still don't like it..er La Dusseldorf...Neu2..in fact anything with members of Neu in it...Durutti Column....theres more.....
Fahey's pre-actual death,rather than joe death table of elements records are rather good though!?

Saw him in Seattle at Eagles Auditorium where all the big acts played back in the 60s.
Drunk as a skunk he was, didn't fall off his chair but listed badly and couldn't play a note. Me and the ten others that were there left pretty pissed off. Money was tight back then.

I think the Red Krayola recording might have been the one that Drag City made a 2CD of, the one called LIVE 1967? If not, I'm with you: it must be good if IA hated it.

Have you got a job or are you on benefits?

Thanks for your weird right wing inspired comment Anon.....no its better than that I'm a lazy arsed artist and a shitkicker.....and...oh yeah...I wanna be famous.....sorry for paraphrasing Divine from the classic movie 'Female trouble' ,but its one of my favourite job descriptions.

Well JW, i must say that I got Beefheart from the first few seconds of 'Frownland', but its yet to happen with Fahey.....and never will I predict.

Yes Unknown, i now recall that the red krayola live 67 was indeed the one with Fahey on.

Thanks for the description, bc it's something I'm not going to read in any other music guide. Rolling Stone (music guide, 1983) loved these albums, but never explained why, I always assumed he was just a folkie like Leo Kottke or some such. Not that it makes the music any more appealing, but I love the fact this was half-love of the past, half-con job, and great American tradition.

It's amazing that with everybody having an opinion bc of the internet we're even more scared than usual to rock the boat. I love reading a well-thought out critique of a band, even if I personally love 'em.

I've read about that Krayola/Fahey recording but don't believe I've ever heard it. If anyone here has, wink wink... JZ, I wonder if John's City of Refuge from '97 might hit the spot?!? Grating in a good way.

I've got the live Fahey/Red Krayola live recording--can send, if desired. It's from a radio broadcast, but it kinda sounds like someone held a mic a few feet from a transistor radio, and the announcer talks over half the set as he seems to think that they're still "tuning up," or something.

I like that his music is like unraveling a ball of yarn to see what's there when it' all done. Usually nothing but yarn. But, I like to see where he's going with it. I don't want to say he tells a story, because that's what all the really boring stuff does. When critics invoke "story" , they mean it has a beginning, middle and end, and that's the most boring of all. And it's become ubiquitous. People who make 30 sec commercials drone on and on about telling a story. Fahey just drones on and on. Good on 'im.

Also, re: post Neu! stuff. Klaus Dinger was a hoot--how can one not like Japandorf? And his need to revisit the classic composition, "Cha Cha 2000," every few weeks or so... And his at least 80 y.o. mom was in the band for a while... Michael Rother, otoh. I kinda like the albums with Jaki Liebzeit, but then he toured with Steve Shelley on drums after Dinger's passing--not that he would ever have played with him again, were he alive--and Shelley seemed utterly incapable of playing a very minimal, sans frills, Apache beat. How is that even possible?

Unravelling a ball of yarn usually ends in finding nothing in the center.....wouldn't go as far as saying that Fahey's music has nothing about it,but i think the substance comes from his folk philosophy rather than the vaguely pleasant guitar picking, finger pickin' dull.
Stories fuck me off too. I never like a movie with a coherant plot,same goes for music and paintings; 1:it shouldn't be explained,and 2/ it shouldn't explain itself. Good art is beyond explanation, but simplistic art is usually bleedingly obvious whats its all about......like landscapes,still lives, and Folk revivalism(sorry John,but thats what it is).

I do kinda like Dinger/ rother's stuff,but listening to it now is a far less radical experience than it was back in the seventies. Now everyone,except Steve Shelley, does the motorik beat. The Neu:la dusseldorf_harmonoia, albums haven't aged very well one might say. But Negativland was a very influential track for me,just didn't dig the rest.....maybe a few trax off Neu 75 are exceptions?