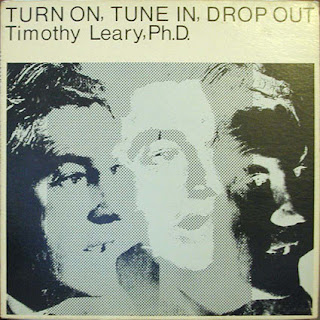 As the weapon of choice for Charles Manson and his control experiments with his hareem of young girlies invariably involved large doses of LSD, while he preached his nonsense to their vulnerable minds,then renacted the Crucifixtion of Christ, staring none other than...himself.
It only makes sense to use the Guru of LSD,Dr. Timmy Leary,Ph.D, to explain,rather more lucidly than Charlie Manson, his philosophy,in a creepy whispery voice,used as a tactic likely to avoid the FBI recording his debut album before he did,then use it in evidence against him.
Ironically, Richard Nixon once described Leary as 'The Most Dangerous Man In America',and managed to be arrested enough to see the inside of 36 prisons worldwide.Allegedly,while in Folsom in California, he was placed in a cell right next to Charles Manson, and though they could not see each other, they could talk together. In their discussions, Manson was surprised and found it difficult to understand why Leary had given people LSD without trying to control them. At one point, Manson said to Leary, "They took you off the streets so that I could continue with your work.".....Hmmmm, Professor Charles Manson?
Not exactly a cult leader,but The Brotherhood of Eternal Love aka, The Hippie Mafia,subsequently considered Leary their spiritual leader.And Timbo actually encouraged the new wave of DIY religions based on Psychedelic drugs,publishing a pamphlet called "Start Your Own Religion" in 1967.
I'm sure part of Tim's raison d'être was to indulge his middle-aged self in the male dominated world of the 'Free Love' sexual revolution,so maybe he had more in common with Charles Manson than is at first apparent?.....but he is,along with W.S.Burroughs, a sampling gold mine.

DOWNLOAD,tune in, and drop out HERE!
Posted by Jonny Zchivago at 17:15

Charles Tex Watson, the actual murderer, was high on datura and Speed when the murders happened. Charles Manson did not kill those people, Tex did, thats who you should be shitting on. If youve ever taken LSD, youd know they are lying about that too. the victims at the tate house were involved in big drug dealing and they got fucked up for ripping people off. Charles Manson shot a black guy who was holding a girl hostage, but the guy survived.

Fucking hell another one!?
I'll repeat an abswer i gave earlier:
"... if someone tells you to kill and you do it...."..Quote......makes both parties guilty of conspiracy to murder. Basic law fact.
Manson has many times admited he told them to go and do it.He's too thick to realise that has incriminated himself many times because he can't keep his big mouth shut.
The LSD you took may not have made you suggestable then why did the CIA use it in experiments for mind control?
There is no evidence for the drug deal gone bad nonsense that emerged in the porole hearing days,the girls involved have never argued in that direction ever?
"Charles shot a black guy holding a (white) girl who survived" is supposed to suggest he's justified in his white supremacist views I assume? Sorry to disappoint you,but, Shooting anyone,yes,even black men,or hostage takers, is attempted murder,
I suggest that you stop reading conspiracy theories and stop making up excuses for mass murdering racists.

When this was reissued, the guy who made the recording said this was the result AFTER he edited the tape to remove the even longer pauses. Apparently Leary would go minutes between utterances, probably contemplating his navel as the center of the infinite whole/hole. The entire LSD/hashish-killer idea has never made sense to me. Perhaps these substances don’t work on me as intended. Give me a dose and I’d be all ‘wonder of existence/miracle of life.’ The instant some doo-dah suggested violence, I’d be off to the next strawberry field. If in the next one there was some shaman or ‘guide’, I’d be on to the next location. Granted, at one time LSD was the CIA’s best hope for mind control, but as John Lennon once quipped, “We must always remember to thank the CIA and the Army for LSD. That's what people forget.... They invented LSD (nope, they just used it to there own nefarious ends) to control people and what they did was give us freedom.” It’s people own fault they don’t take ownership of themselves. I’d be happy to leave it there if it didn’t so negatively affect the larger society.

you are falling for lies but whatever, believe what you want. its good to question mainstream media, but people are lazy. Charles Manson is not the boogieman, they sold him as the boogieman as another excuse to justify the war on drugs hey started in early 70s. nixon declared manson guilty before his trial ended, that is illegal. there is a lot of evidence to support it was a drug burn, you just arent looking into it, and would rather regurgitate the hollywood/media lies.

These are the kind of paranoid delusions that got Trump elected. Everythings Fake of course,except the 'Truth' you've read in the 'Alternative media'.Naturally you're partie to a special knowledge that we aren't!
I don't think we needed Manson to justify a war on drugs,just another silly conspiracy theory with NOTHING to bqck it up,except on youtube.....dreamt up while abusing the same substances that the CIA apparently waste their time faking thousands of documents and killing witnesses to stop.Don't you think it all sounds a bit silly?.....of course the usual answer to all this from people like you is "DO YOUR RESEARCH",which doesn't mean watch stuff on youtube or read populist literature on the JFK sassination.Enjoy your drugs maaaaaan.

Its ironic, because Manson wanted to defend himself in court and they refused his request....i'll get my waddingtons ouija board out and see what he's got to say from beyond the grave.