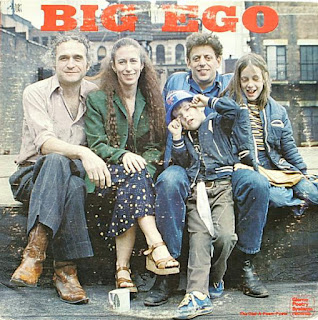 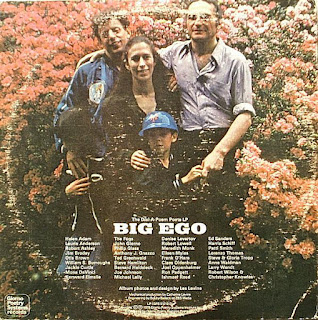 Is it Ironic that an album called 'Big Ego' is opened by Patti Smith?....HeHeee,i'm like a dog with a bone here..... Seven minutes and fifty seconds of literary references,beat talk,and unaccompanied caterwauling.Truly horrible;but at least she didn't have that awful adult orientated rock group backing her up. I still haven't recovered from buying and then playing 'Horses',it just sounded so...er...'old'!? In fact most of those new york bohemian bands struck me in the same way...including The Ramones(Ironic bubblegum Rock?). The striking exception were 'Talking Heads',something genuinely new with no obvious roots, and to a certain extent, 'Television';mainly because they both dressed straight. But,Like The Ramones and Smith, punk they were not.
Cleveland seemed to have far more 'punk' cred to these ears.
At least we've got some early Philip Glass (yeah that's him,the funny looking one on the cover!?) to raise the bar,followed by lots of interesting and confrontational poetry of course;all this and a Robert Ashley track to get the weird level up a tad.
A evening of Poetry anyone? Shut up and listen for a couple of hours surrounded by an audience with applause hair-triggers, who laugh at the slightest hint of anything 'Clever';an action inferring that they are 'clever' too.The same problem occurs when a singer pronounces his lyrics clearly so you can hear the words,which naturally suggests that he,forward slash,she, must be saying something sickeningly meaningful.Its pop music, get over it! I'm sure whoever's reading this don't give several shades of shite what I think about anything,as much as I could not care less what a pop vocalists view is on any political situation or dogma.I still have no idea what Joe Strummer was going on about,but from what I understand, it was some pseudo-lefty hypocrisy with rhymes kinda stuff.Trying their level best to put the 'Y' in Nihilism.
No other such event demonstrates the manifestation of the human 'Hive Mind' than a poetry performance. The best way to experience it is buy,or download,the record of the event,hitting the pause button to get another smoothie from the fridge,or most likely go to bed.
No...its good really....its just that the punk priestess as played by hippie Smith just pissed me off a tad.

DOWNLOAD a infinitely compressed mass of ego's HERE!
Posted by Jonny Zchivago at 00:34

>> The striking exception were 'Talking Heads',something genuinely new with no obvious roots, and to a certain extent, 'Television

What about Devo that had started to produce weird stuff in 1974? Don't you think they had a significant influence on the Talking Heads, above all with Mark Mothersbaugh's singing style?

I doubt anyone would have been aware of Devo in New york, or even anywhere else outside of Akron in 1974/5/6. So no,Devo were not an influence on anybody before 1977 at least. But part of the Cleveland scene they were,which was far more innovative than the New York scene, if far less influential.

So I guess the question would be was TH aware of Devo pre '77. Granted, you had to have your ear pretty close to the ground by be aware of their early singles, but I wouldn't be shocked to learn TH was among that faction. Either way, they were both obviously very influential by the late 70s

I don't want to listen to this poetry album. But, since you brought up those NYC bands, from that era, I'm wondering if you know the more obscure band called Come On. That stuff is great!

I'm ashamed to say i haven't yet encountered 'Come On',I will fill this hole asap.

Their catalog was reissued and can be seen here https://comeonnyc.bandcamp.com/album/come-on
You don't have to publish this on your blog, I just figured I'd point you to the weirdo music

OMG - I don't care about Patti Smith's music, but listening to her prattle on is unbearable! And listen to how many times she uses 'like' as filler; I thought that mental impediment started in the 80s, but I guess if Smith is a pioneer of something, that had to be it. Oh and she doesn't know how to pronounce papyrus. Oy.