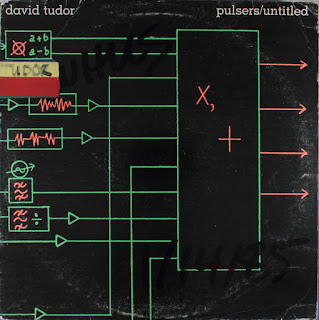 Tudor's circuit bending classic was the future from the past,now!Finally captured on tape and released at a time when electronic music meant trying to make your synth sound like a trumpet. If you want to sound like a trumpet, get a Trumpet.....better still, don't sound like a Trumpet,unless your name is Miles davis,its awful!Make your electronic instrument sound like electronics? Now there's a novel idea?
This album sounds like fizzing frying pulsing electronic circuitary being made to do something they'd rather not,if they had a personality that is? Which ,of course, electrical circuits don't have...yet.
That's where humans come in,and its another pointer towards both a future,and the present. Together we could achieve greatness,apart we are just a biological machine with a limited lifespan, and a bunch of silicon based hardware that needs its mummy.
Nowadays, this solid state chicanery is common place,as der yoof have finally realised that electronics should sound like electronics, unstable and full of cliches barely beyond our control.
In the future we won't just be downloading illegal sound files onto a laptop,we'll probably be downloading our personalities onto a distant machine or circuitboard, to either escape death, or travel to distant stars as a stream of data.But,if you do this in the future,DO NOT forget to back up your files!!!
This idea horrifies most humans,but that's denying evolution,which often produces horrific answers to specific problems. Like denying David Tudor the right to evolve music in the fifties when he,and a handful of others started making this ground-reinventing method of alien sounding music production.
As an unknown yoof commented on a well known music listing site :
"This album is sick. Way before its time. Love the circuit bent flavor." (Unknown Youth 2014)

"electronics should sound like electronics"?!?!?! Absolutely! Remember 1968's "Switched On Bach"? A hit record made with one of those newfangled 'synthesizer' things. What a waste.. a 20th century technological wonder used to make 20th century reproductions of 18th century music! Many thanks for David Tudor's music.

Thanks so much for all your great posts. Loving the Tudor. Any chance you have his Three Electronic Pieces album?

Well this one is two thirds of the three electronic pieces album,that was the cd version of this with a bonus track.

Had no idea! Thanks again for all that you do to make this music available.