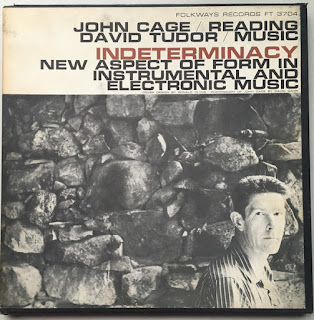 So we have this pair to thank for Cornelius Cardew's first big reactionary tantrum do we?
The first recorded showcase for the musical theory of "Indeterminacy",as dreamed up, nay made up by avant-garde experimentalist numero uno, John Cage.
Which is a composing approach in which some aspects of a musical work are left open to chance or to the interpreter's free choice. John Cage, a pioneer of indeterminacy, defined it as "the ability of a piece to be performed in substantially different ways". Not quite 'free' music, but a substantial step in that direction.

Basically this is a spoken word piece backed up by the sparse electronics,voice processing and piano of David Tudor doing the random parts. I could listen to stuff like this all day.
I'm certain that such works have little trouble getting the desired reaction from the 'ordinary' average joe upon encountering this music from outer-space, as it would have seemed in 1959.Rather challenging,and would most likely end in bursts of anger,or troubled incomprehension. This is what ,dare I say, Art(?) should achieve,and this stuff would probably gain the same reaction if played to the same Henry and Henrietta Normals of today,as we have now passed the peak of the new enlightenment and a speedy dumbing down of the world populous is continuing apace.
Averaged out, we really haven't advanced intellectually at all in the ensuing 60 years.We're leaving all that thinking stuff to machines,which of course have little intellectual sophistication,and the glaring illogic of any of John Cage's works would send their A.I. into spasms of sparks and fumes as their lithium batteries burst into flames,screaming in a robot voice, "Illogical,Illogical,must self-destruct,must sterilize,does not compute,Error,Error!".....like the hybrid robot which uses the advanced dangling on a string drive to move in that Star Trek episode called 'Nomad'.(Click here to learn how to handle rogue robots)!Nomad also had the same problem understanding the concept of 'music',which he handles by wiping the mind of Uhura....(Click Here to see how Nomad deals with 'Music'....our future lies here!)
Meanwhile, Henry and Henrietta indulge themselves in their version of Technology,watching pornography,online dating and gossiping on social media.....in many cases talking 'dirty' with an online 'Bot'.
We're Fucked!

I know, hi-tech has sped up the race to dumb. We (not us) are rapidly becoming the Eloi in "The Time Machine". The super intelligent have made it possible to survive knowing nothing, and thinking you're smart because you're operating a tech device. I imagined everyone would be programming once society hit this tech level, but it's the opposite. This stuff is a trend-line enforcer, a "most-popular choice" popularizer.

Also, I love how John Cage sounds so much like Vincent Price.

JZ, in going through the works of some of the better known 'avant-garde' composers over the last two weeks or so you have picked quite a few pieces that I had not heard before, or not heard in the recordings you have chosen (including this one). Most excellent, thank you! (I wouldn't mind hearing the 4CD version of THE GREAT LEARNING, in case there is more interest ....)

Music modeled on life. No matter how well you have planned it, the unexpected can always intrude. Listen to Cage's "4:33". I have been looking for this album for years. Many thanks for sharing it.