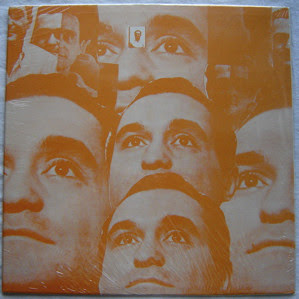 John Giorno did an album of his own in the consumer of love in '67,although '69 would have been more appropriate considering the awfully rude content of this poetry.....erotic i think they call it.
Really its about wanking under the guise of 'Its Art Maaaan'.
I must admit it give me a bit of a twitcher at times,even the gay side!
Either way, it would certainly rub the members of the establishment up the wrong way as well as your own member....if you should be that way inclined.
Is he exploring the over-explored and tiresome concept of sexuality, or just trying to send ripples...not nipples...across the millpond of sixties society.
One big recommendation is that we don't get to hear the dulcet tones of Giorno's throaty croaking,as the poems are read by sveral of John's artzy fartzy chums,including rather famous Pop Artist type Robert Rauschenberg himself.Never one to avoid name-dropping,Rauschenberg's name is promenently displayed on the cover,just so you know that John's got famous artist friends and you haven't.....lucky that, because we don't want famous friends here at Die or DIY?...in fact its bordering on the not having ANY friends at all kind of doomsday bunker mentality scenario.
If you played this at your chess club's annual darts evening and clam-dip soirée,you almost certainly wouldn't have any friends left come half-past ten;and the ones that stayed i'm not sure you'd want to remain your friends much past eleven.....'Time for bed' said Zebedee.....ALONE!!!!!
No doubt there be perv's out there who think this is their favourite record of the sixties,an act of revolution in an age of sexual liberation; which is just fancy talk for you're just a Loner with a Boner.
Phwoooooaaaar missus!
....But, nonetheless, Giorno's best album,especially as he's not on it,and nice and lite on those bloody echo effects that came to symbolise his later work.

Giorno would likely not appreciate your failure to note Uma Thurman's mom/Timothy Leary's ex-wife amongst his "famous" friends! Incidentally, I wonder how many of the people on this are like Barons/Baronesses?

Doesn’t seem to want to happen. “The file you requested has been blocked for a violation of our Terms of Service.” The big blue Download button below seems to go nowhere.

Giorno was a minor writer who spent a lot of time acquiring glamour-by-association. (When Burroughs died he put out a statement that he'd been with him, when in reality he was halfway across America.) On the other hand, he did put out all these records.

i think its because it has the word pornographic in the tile...mediafire, being based in texas are sensitive about stuff like that....i better reup it to somewhere with principles younger than the stone age....google.

re-upped to google drive as of now.

thx for the hrs of things spoken