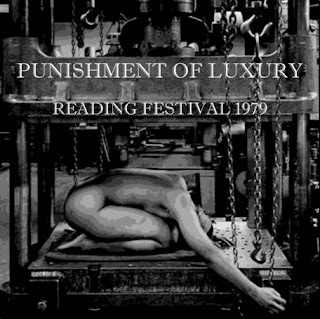 "Do you like cold Chips David?", and "I'll facking 'ave ya!", are just two of the tasty morsels of dialogue captured from the restless crowd on this recording of Punishment Of Luxury's career peak at the Reading Festival in 1979.
There were an inordinate number of Greebo's waiting for Motorhead ,ready for a fight. Punilux's appearance apparently caused a vicious can fight between their punky fans and a larger number of long haired headbangers.Although Punilux tried to calm the audience , their remarks did not help cool things down one bit . Sporadic fights broke out throughout the evening as bored ( or perhaps intoxicated ) audience members took their frustrations out on other fans .
Inexplicably they were below Doll By Doll on the bill!?....whom the Motorhead fans hated even more than Punishment Of Luxury......but they liked The Cure!??....obviously they were too hammered to care by then. More understandably they loved Wilko Johnson's Solid Senders, so these Greebo's couldn't have been that pissed, or that stupid.
The Police and The (fucking awful) Tourists,featuring the reprehensible Dave Stewart and Annie Lennox had to follow Motorhead!??.....who decided on this running order???
Festivals are fucking awful anyway, but at least some of the bands weren't, like Punishment Of Luxury.

It's very difficult to remember all the way back to my 13 year-old self watching Punishment Of Luxury play Reading in 1979. My main early memory that year is being pissed off to miss Motörhead thanks to my old man hanging about having lunch probably watching some terribly important news on the telly. Anyway by the time he drove us down there they were onstage (Motörhead) and I only got to hear two or three tunes (it was 1979; they hadn't quite made it, so they were on in the early part of the bill)...and then we're stuck listening to The Tourists (nuff said), not a good start. Anyway getting back to Punilux: and I could be wrong, they might have been pretty uncomfortable being glared at and heckled by hundreds of drunken metal heads...might have even been a little freaked out? haha...but I remembered them appearing to be in control of that Reading crowd and the recording seems to bear that out, no easy thing, but they held it together. It comes across here really well, also that the cabal of Punilux fans near to whatever recording device he or she has using sounded like they were having a pretty good time. Great artifact as you say. Thanks again.

Bringing back memories, there were four of us just 17 halfway through our A levels in Oakham. Catching a bus from leicester to Reading with a case of beer heading to our first festival, although to be honest there was only one festival at the time. The walk from the bus station to the site. To be honest although we were all music fans we didn't watch that many bands it was about soaking up the atmosphere, getting drunk and caging cigarettes, couldn't believe there was nowhere to buy them. 3 distinct memories remain, Lemmy & Animal letting a young lady through the wire fencing into the back stage area, The Police being really good (I did get better and more discerning ) and walking from our tent to the arena hearing a band playing thinking they sounded good, walking faster liking the music more and more, showing my wristband and the music stopping, the band had left the stage. Who were they?From reading the back of t-shirts ( there were no programs) and asking around I came to the conclusion it was Punilux. I subsequently bought all their singles/albums/reissues etc. and loved them all. But I truthfully do not know if the band I heard as I made my way in was Punilux

Oakham eh?...very urban.
There's an Oakham band hiding in the pages of this 'ere blog....The Amber Squad....do a search.I suppose The Rutles came from Oakham too?
I, myself, hail from Oakham's leafy neighbour, Leicester.
I think I thought The Police were good back then too....but now we know what an arsehole Gordon 'Sting' Sumner is.

So you are a big city boy, the time I spend in Ainleys and the record shop I can't remember the name of by the market, going to the ticket office in town for the De Montford Hall gigs. I even made it to Filbert Street a couple of times.
The Amber Squad I remember well, Oakham's only band, their first single got reviewed on radio 1's round table, heady days

The shop by the market?.....That was Revolver. One of the workers commented on here a few weeks ago on my tribute to Leicester City Compilation: "Dilly Ding Dilly Dong:No-one listened to our songs", which also included The Amber Squad.

Hey I can't believe you spelled Montfort as Montford, like they used to in the gig guides of the london music press.
Have you seen this?...Jimi Hendrix hanging around in Leicester,de montfort hall gardens to be exact, in 66. Taken by Val from Lyddington,Rutland: