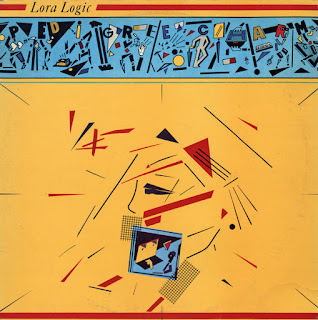 To all intents and purposes this is 'Essential Logic' after they lost direction, with some of 'Camberwell Now', going Disco.
To these ears it sounds like a contractual obligation record. Gone is the energy,invention and sharp edges of earlier times,and replaced with blacmange, but blancmange you can dance to at the indie disco.Its pleasant enough, but we want more than that don't we?......DON'T WE?

DOWNLOAD with some discreet charm HERE!
Posted by Jonny Zchivago at 00:32

I like this record, maybe because it was the first I heard from her, and after that it only became better! Still, there's enough on this album that I keep it for, especially "Rat Allé", which I like a lot (and have included on one of my compilations at my blog). Compared to Essential Logic (f.e. "Wake Up!") it's less thrilling, but I rate this over much of what sold in the 80's.

I have a Lora Logic Peel session from 1981 if there's any interest. Only 10 mins long and not nearly as interesting as Essential Logic.

I'd be interested in the Lora Logic Peel session, david lz! :)

Hey Lucky, it's actually on Youtube, here's a link
https://www.youtube.com/watch?v=LFLYajLjFfI

Send me our email address if you want the audio files. I've listened to it for the first time in years and it's just a bit dull, sad to say!

Thanks for the info, David!

I snatched the audio from YouTube, but went for the radio version with Peel's commentary:
https://www.youtube.com/watch?v=R9EIgh5HF18

Although songs like Stop Halt and Wonderful Offer orbit a place bordering on commerciality they were never going to find an easy position in the top 40 as they're still too weird for the average consumer. Most of Pedigree Charm is a unique album that fuses indie, jazz, pop, lounge with Logic's peculiar singing style. It's not a record that will be loved by everyone, but I think there's a lot more going on here than you are finding. Rat Allé, Horrible Party in particular, but also Crystal Gazing are complex and beautifully constructed. If anything it suffers due to comparisons to the rough styling of early Essential Logic, as it is not that. Approached on its own terms though, I think it's a unique gem showcasing the maturity of Logic's work.

I like!
I already knew Essential Logic! But not Lora Logic. Both great!