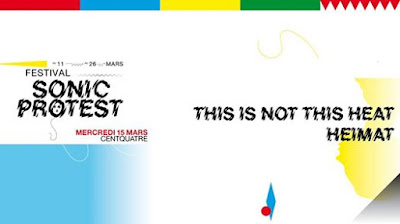 I often complain about groups reforming to earn a bit of dough,and in the process tarnishing a legend that was best left unblemished.
This is not the case with 'This Is Not This Heat' however, who have respected their former groups legacy by recognising that certain members are no longer with us, and therefore this is something quite different. A kind of tribute,and reinvention of their past group rather than a nostalgia trip for cash.Hence the title of the project ensures that we know that this is definitely not 'This Heat'. A lot of other groups who reform around one or less members should use that epithet, like This is Not Dr Feelgood, or This is Not Bucks Fizz.
This Heat's legend has grown immeasurably in the 21st century, and inevitably the demand for some kind of product was bound to result in some kind of reincarnation by the remaining members,although the late Gareth Williams' replacement Trefor Goronwy is absent (i suppose this carries on the welsh connection still further?).
The two Charles's, Hayward and Bullen, are augmented by a number of 'guests' to plough through the This Heat back catalogue,including the traditional improvisation, and sound as if they had never left us.
All recorded in the highest quality you've ever heard these songs captured live in (The first time ever in the case of "24 Track loop"/Repeat!).Fantastic.
I love this group and I have no problem with them trying to get some meagre recompense for their monumental legacy. They can do anything they want to do, and more to the point they are more than capable of doing it, which is also rare in these delicate cases.

This IS a DOWNLOAD HERE!
Posted by Jonny Zchivago at 10:46

Email ThisBlogThis!Share to TwitterShare to FacebookShare to Pinterest
Labels: 2017, Avant Rock, post-punk, Prog, Prog-Punk, This Heat, This Is Not This Heat, UK

Fantastic! I was hoping for a decent concert registration since their OTO debut and here at last it is. Great concert and great sound.

So thank you, Johnny!

thank you so much for this wonderful gem! i was envious of those who could attend. masterpiece.

Reunions generally suck and are just too awkward and embarrassing for my taste. In this case, I think it’s obviously important enough to give it a shot. If they can somehow manage to squeeze a little dosh out of the deal as well, good on ‘em. This Heat is as relevant now as it was in ’79 - ‘82. I heard this was in the offing and your post will be my first contact with the current line up. If they decided to record and release new material, regardless what they choose to call the group, it would be welcome news.

BTW, I haven’t typed at you since the French election. Thanks to everyone there who decided against the blond moron. Wish the US had.

You, sir, are fab. Now, can you please NOT post the "new Pop Group" live tapes, who have turned into those prostitutes they were singing about in 1979, and instead post some vintage weirdness from them. Also, I have This Heat tapes not in circulation on the Interwebs. I hate digitization so intensely that it might take me a while but I will get them to you on high quality (sic) mp3s eventually. Because you, sir, are fab.

Thank you Magnus.
The Nu Pop Group have been described as sounding like Haircut 100....i had a listen and they do....but a lot worse. Haircut 100 were quite good as 80's pop groups go, except that they copied Orange Juice rather too well.
Don't have much vintage Pop Group stuff outside the two LP's/singles, maybe the "We Are Time" retrospective, and the Peel sessions.
As for This Heat tapes that i don't already have, I am salivating. Just digitize them in one heap, and I'll edit them for you...as for the Nu Pop Group...."They are All Prostitutes"!
F.A.B.

Very pleased indeed you've posted this and couldn't agree more with your comments, Jonny. I'd love to get a recording this good of the Barbican leg of that tour, which we were lucky enough to attend and I will never forget. Quite an emotional evening for many people there, both on and off-stage. cheers.

THANK YOU so much for this - was really hoping to find a good recording of one of their gigs. and thanks also for the other this heat material. a great blog...please keep it going. cheers...

This Heat finally digitalized for you in heaps. So far:
Complete Reims concert from May 1980 (11 songs)
and
Action Space London July 17 1981 (7 songs)

I also have one song from Mariahissen, I am still looking for the rest of this concert and will turn into 1s and 0s when I find the damned thing. Great concert, that is Mariahissen, Stockholm. Tape cover says April 11 1980 but I think it was later.

How do I best send you a dropbox link?

Peace on earth and all that, Magnus.

Magnus!
You have brought me gold frankincense and myrrh!
Enuff of these festive clichés!

Great stuff...can't get enuff This Heat.
I have a new Camberwell Now gig, and a This Heat on dutch radio at Meervaart in 82 in high quality.
So these new ones will be added to those two when i post them in a few weeks. The stockholm concert would be interesting too if you find it.

send me the link to:

Festive greetings to you.

Sorry Jonny, I got no ping when you replied to this, but now I am sending you an invite link.

I put pix of the old bootleg tapes in there too, plus a bonus:
a Pistols gig I always loved, and the mix is great too, from Stockholm Karen 1977. I think this tape was the source for the rare Bad Boys LP. Not sure if it is already out there on the interwebs, but this is a copy made directly from the original so hopefully nice on your ears.

Now, drop everything and run to your mailbox!

Looking forward to the other two also, Camberwell Now has sailed (apologies) into my heart after the initial OhNoTheyAreNotAsGoodAsThisHeat feeling of the mid-80s.