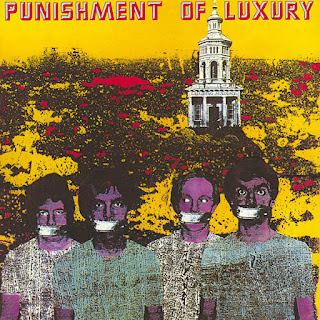 'Post-punk' was in fact Prog's triumphant return after a forced tactical withdrawal during Punk Rock's 'Khmer Rouge' approach to anything slightly intellectual or  musicianly.
Most of the intelligentsia of the punk movement were secret Prog fans, Like Devoto,Shelley, Lydon, Levine, and even the dumber end had its prog acolytes, like Captain Sensible and Rat Scabies.
As far as I was concerned, so-called 'Post-Punk' was Punk Rock, and never considered it all to be Post-anything; it was still happening wasn't it?
So suddenly in '78, filling the gaping hole left by Standard Punk's inability to move on from The Ramones template, we had This Heat, Magazine,Cardiacs and Punishment of Luxury. Alongside an increasingly active Fripp and Eno,a resurrected Van Der Graff Generator, and plenty of Peter Hamill albums. All suitably punkified of course.
Punishment Of Luxury (aka Punilux) were a bunch of actors from North East England, who made a type of funky performance rock, with shifting time signatures, fertile with ideas, and a spikey edge. All performed with a technical ability that was taboo in 1977/8.
Whereas Prog Rock before 1976 had largely turned into some kind of bad musical, the new revitalised Prog (aka Post-Punk) had learned the harsh lessons dealt out by the Punk's,stripped away the Lord of the rings and Mozart nonsense,and concentrated on actually being er...progressive. All packaged(with classic Prog art gatefold sleeve to boot!) in shorter song formats for those modern '78 kids with short attention spans;introducing heavier subject matter than chaos and boredom.
Punilux were outstandingly good, and it never fails to astound me that they virtually sank without trace. It wasn't until recently that i found out that they had a couple more albums released after this.....not on United Artists though, who dropped them like a hot potato as soon as they never went top ten with a bullet, and/or decided that they weren't 'New Wave enough.
Incredibly, as recently as 2012, they released a new album, and played gigs!?.... And why not?

DOWNLOAD academically for a laugh HERE!
Posted by Jonny Zchivago at 23:21

I saw Punilux as a 13 year old at Reading Festival 1979 thanks to my old man bringing me along. I have a copy elsewhere on an ext HD but I don't think it includes the bonus tracks so cheers.

I do amazingly, have a recording of Punilux at Reading 1979.
I'll post it next. It does have some amusing dialogue among the audience between the tracks.....maybe you're on it?

Thanks Johnny. Punilux were a great band, despite their adoption of stripped wooly balaclavas with eyeholes for stagewear. There are, or were, some good videos online of their more recent performances.

& you're quite right about the return of progrock, altho it's a bit more blurred i think: early Essential Logic live sounded like Van de Graaf on heat, Peter Hammill got a bit punky early on with his Nadir persona.

Anyway, thanks for all the music.
madbear

Indeed, Essential Logic up after Punilux stuff.
As i am a rabid Van Der Graaf fan, i can only agree.
Prog Time signature change in a short song kings of post-punk have to be the Diagram Brothers?, the EGG of post punk?

i have to admit i never got EGG at all.... i interviewed dave stewart and he was *so* up himself and being a "proper musician" that i never bothered again. Chris Cutler was as bad...

But yes to the Diagram Brothers, along with Dub Sex, Magazine, early [krautrock] Simple Minds, first XTC album [or, better, live], 23 Skidoo, Spherical Objects, Eyelesss in Gaza and a lot of other things. I think I'm nostalgic.

thanks for the xtc - downloading as i write. no worries re magazine and simple minds. & yes i have the sferical objcts and EinG. fantastic.
thanks again

Flipping heck well I never - off over to that Reading 79 post right now. Scanning thesaurus for superlatives once again r.e. this amazing blog of yours. Cheeers!

Yeah, its got dodgy cover art...nothing to do with me i hasten to add.....but its an interesting piece of archaeology.
Enjoy.

Chris Cutler seems a lot stuffier than most of the Cow lot--the ones I've met, at least--and so many of his other cohorts. I remember telling him that I had one of the few live Gong recordings on which he played drums and he seemed slightly perturbed. He's very much anti-bootleg, and his stance seems to be more about the financial aspects of it rather than the distribution of recordings of questionable quality, i.e., shows they weren't especially happy with, for instance. Seems a trifle hypocritical.

On the other hand, Charles Hayward seems only to object--and not very strongly--to the circulation of shows which he felt weren't especially good. Back in the 90's, he had me send him a copy of that Scala show from 79, as it, apparently, was one of the "good ones." Me, I've yet to hear a This Heat recording I don't like.

Also, I always preferred the early National Health stuff--the sessions with Bill Bruford--to EGG. I never "got" Stewart's Pop-thing--was it just about the money, or was he truly invested in making "intelligent pop" (or whatever it was that he called it)?

Charles Hayward was not a fan of This Heat post-Gareth Williams, and felt that the band had lost its magic.....he was wrong of course.
Most of the proggy types all obviously had humongous ego's, which was largely portrayed in their humongous ego music.Fancied themselves as mozart or at least some musicianly genius....quite unsavory....this wasn't the case with the post-punk crowd, who had learnt their lessons from the punk explosion.
I like EGG....not necessarily dave stewart though.......chris cutler was is a twat.