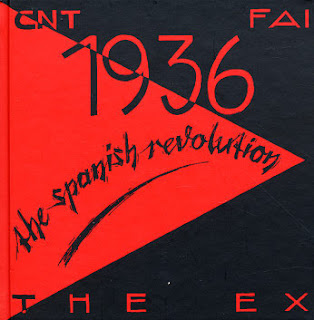 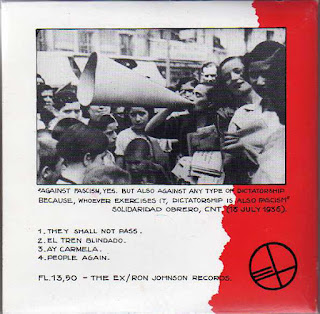 Apparently, this was one of the great loss makers for Ron Johnson Records......I quote Dave Parsons (Mr Ron Johnson)....."The Ex double-single was a fiasco of Rough Trade's making - they sold it at a price that was lower than the manufacturing cost and because it was reviewed as such amazing product for such amazing price felt that they couldn't put the price up - it sold 15000 copies and RJ lost £15000! Fantastic."

The Ex were a Dutch Crass basically, but had a little more imagination with their limited musical ability.
The soapbox nature of their political ideology, if it can be called an ideology, gets a tad tiresome, as does the endless bleating of Crass.
Personally if you follow any political dogma, and constantly bang on about it, you're as much an enemy as those pricks who feel a need to control other peoples lives.
For me Anarchy should be as politicianless, as much as leaderless; but as always there's always someone, some Human, who wants to be the leader, unopposed if necessary, to crush our collective spirit in a different, but the same, way.
The Ex, in my opinion, were not a Ron Johnson band,and like the Sewer Zombies later on,I cannot explain their appeal!?
Tracklist:

DOWNLOAD some stuff glorifying the anti-franco anarchists of 1936 by some 'anarchists' from 1986 HERE!
Posted by Jonny Zchivago at 18:11

Bought this in 86 when it came out. Was big into Crass at the time. I still love opening it and looking at it whenever I see it in my singles collection.

Hi JZ, totally get and wise words btw what you're saying about political opinions and music. I've often contemplated do they mix well and has it been done 'the best it can be done'.
I'm 42 and have heard many forms and types of music and have a huge collection of music too. My point being, out of the tens and tens of thousands of albums i know off by heart I can't think of one that improved healthcare or the nations childrens education or stopped a war etc. Sure music can raise awareness to alot of important issues, but politics, nothing seems to change. Ever, cause the people with the power don't listen to the music that lets common sense prevail. Loving this upload as I type though, btw, is there a couple of songs in Spanish? Cheers JZ, hope you're good my friend and thanks as always.

I'm all for Politically flavoured lyrics/themes, but what i find a real turn off are obvious/standard dogma's spouted incessantly.Its as bad as love songs....one or two are ok, but anymore and you just wanna cut yer ears off.
Pop music has had an undeniable role in expediting cultural change however; and it could be heralded as some kind of popular philosophy in certain cases; but lets leave the political dogma to the wankers who need it.

'..the people in power don't listen to the music'....can also be applied to quite a lot of these preaching groups,who don't even seem to listen to their own records.

Yes indeed, I am good Judas, as I hope you are too?

Thanks for your reply Jonny. I agree too much of one thing is a bad thing. No matter what the subject matter is I suppose.
When I was young (teens) I thought the bands I listened to would change the world, overthrow governments, right wrongs etc. I think in the end whether the intention was there or not, it was just a big marketing ploy by some manager in some cases. Maybe I was just young, dumb and naive. I've spent most of my life in Northern Ireland, where we have images every so often of Bono holding hands with government leaders etc. as if he was the cure. Sickening. Anyways I digress. Yes I'm good, bitter, twisted and loathing, but fine otherwise! Thanks for for everything as always.

Thanks Johnny - needed to grab that Spanish Revolution EP.
I've agreed with a lot of your comments re 'Anarcho-punk'and the like. A few decent things came out of Crass records, such as The Cravats for instance imo, but the only Crass LP I can actually stand to listen to today is 'Penis Envy', which is mercifully free of Steve Ignorant's barking, hectoring tones, keeping vocal duties female. While we're on the subject, if there's one thing I can't stand it's these 'punk' festivals and weekenders, with the awful generic-looking posters full of generic-looking band logos...not to mention all the in-fighting etc etc. I avoid all that like the plague personally. Keeps me young :D
I'd say the Ex have done well though over the years to keep what they do fresh, exploring themselves and experimenting. The LP they made with Tom Cora is very good I think, check it out sometime, see what you make of it.

Indeed, Penis Envy has the best artwork, and concept.
But the manner and delivery of the Ladies, on those awful songs tends to get on, 'scuse the pun, one's tits.
The posh undertones, along with the annoyingly 'superior' delivery of these Anarchettes, is more appalling than appealing.

I agree, I can't stand Punk festivals, in fact any Punk behaviour that calls itself Punk.....this in itself disqualifies anyone from being punk.In fact I can't stand Punks...especially Old punks rolling up like Arthur Mullard and Les Dawson in a mohawk wig and brand new biker jacket at ye olde tyme music hall for third wave punks......nothing at all to do with me!

I will get round to checking out later EX....i just don't like old EX....and i get flack for it!!

Cheers mate,you're probably the longest serving commenter on this blog,dating right back to 2009 i think.