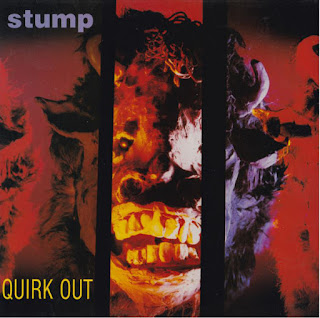 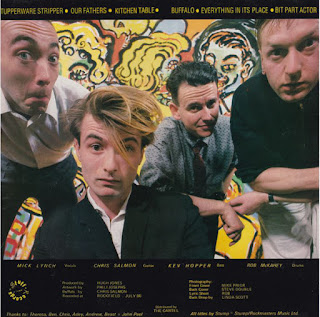 Then Stump mysteriously appeared in a high gloss sleeved mini-album on some unknown label called 'Stuff Records'. Obviously to anyone with half a brain cell, this label was a crass attempt by major label wankers Ensign to try and resemble an Independent set up so as not to alienate Stump's fan base......which it did. They even had it distributed by The Cartel, so a stealthy,but doomed, effort was indeed made.
The catalogue number was good anyway....Stuff U2!
The tunes are the usual tremolo heavy, herky jerky, slidey quirk out's that the group were synonymous with. The intensely irritating 'Buffalo' is included, along with a decent tune that could have been written by a person skilled in the art of classic songcraft, "Our Fathers".If there was a Beefheart equivalent to this tune, it would be from fan base losing "Blue Jeans and Moon Beams" rather than fan base rebuilding "Doc at the Radar Station"; and benefits greatly from a total lack of.... 'Quirk Out'!

DOWNLOAD and stuff U2 HERE!
Posted by Jonny Zchivago at 11:03

I wasn't aware that I had expressed any obvious dislike for Stump?
I do like to represent a world that isn't full of stuff that I think is rather marvellous. If you read all these so-called modern music mags, you'll never see a bad review of a record...everythings good or above,which is boring. i prefer the truth, and trying to write a different point of view;not necessarily about the actual record either.
I post Stump, not because i like or don't like 'em, but because i like Ron Johnson records, which they were an intrinsic part of.....although after doing all this Ron Johnson stuff, i'm beginning to change my mind....there were an awful lot of terrible vocalists on that label.