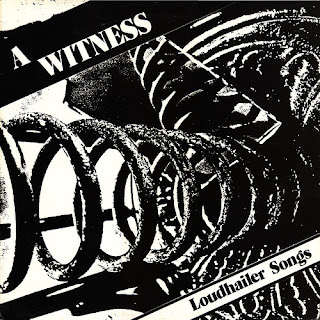 A Quintessential Ron Johnson group was A Witness, and this is an early release for both of these entities.
Looking at the front cover and you'd expect some Industrial group like Einsturzende Neubauten to occupy the grooves within, but no!..... yet another unique take on the classic Guitar Bass Voice and Drums format.....in this case Drum Machine.
Gravelly Bass, Atonal Guitar, and a nasally vocalist singing surreal lyrics over some uncomfortably grating,angular,tunes......this is possibly their best record? 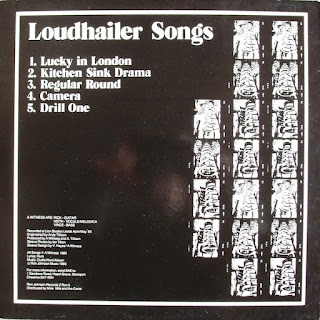 Keep up the good work posting all this stuff.

Initially used your site for looking for stuff just not available anywhere else, namely the ultra rare Cabs demos.

Honestly say I'd never heard of A Witness before this week, but liking what I've heard so far

Cheers for posting this and pretty much everything, even the shite stuff

I used to use DoD for stuff just not available at all, eg early Cabs demos

I used to love the DIY tapes advertised in NME and Sounds, most were shite, but there was something of quality in the diy ethos which made them always worth listening to.

Keep up the good work, I can honestly say I'd never heard of A Witness until this week,but liking what I've heard so far

My pleasure.
I have to post shite to emphasize the diamonds amongst the turds.
Peel replacement suits me fine.....stopped listening to him around the time of Acid House....he became irrelevant from then on, despite what everyone says.

I'll get back to the cassette stuff soon....its just that what i have to post is almost totally Industrial/ drone-y stuff, with the odd diamond. So i have to work a few angles to keep it interesting, if you know what i mean?

So now you've discovered A Witness...thats a surprise, i thought they were pretty well known?.....maybe not?.....but I ain't gonna start posting any Fall albums at least, that'd be going too far into the mainstream.
Scritti polliti excepted...coming soon.