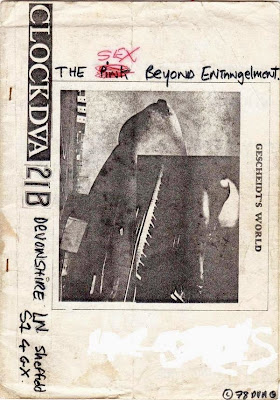 Staying in Sheffield,and also following on from the "1980:The First Fifteen Minutes" ep, we are naturally led to Clock DVA, who released loads of obscure tapes around 1978/9 on Newton's own DVAtion label. This being the best of the ones I've heard. DVA in its best Cabaret Voltaire style Old Skool Industrial mode. I used to think that Clock DVA were shit from 'Thirst' onwards, and that this was their best stuff by miles;but I played 'Thirst' today, and thought it was fantatstic! Even those mid-atlantic movie trailer vocals didn't get on my nerves......I must have mellowed in my middle ageness!?(How depressing!)
I dare not play 'Advantage' for the fear that I may love that as well!?
This cassette is great chaotic, stream of consciousness, abstract underwater pop music for Wannabe outsiders.
I just love how this sounds; after listening to millions of hours of recorded music over the last 40 years,my lifeforce has decided that this muffled garbled racket is in fact, "Perfection"?

A1 Sonambulist
A2 The Female Mirror
A3 Now Haag
A4 Edge
A5 1958
A6 Constructivists
A7 Sexual Overture
B1
Genitals And Genosis (The Texture Of Two Tape Recordings)
B2 The Pop Hell
B3 Otto M.

Your description makes me like Clock DVA even better!

coming later this year on Vinyl On Demand is part two of Clock Dva Horology!

yessss early Clock! as always, thanks a million.

I haven't heard anything before 'White Souls In Black Suits' so I will enjoy this. Many thanks.

This is great, thanks, Mr. Z! Would be great to hear the outrageously expensive Horology box from 2012; heard so much about this, but, alas, as with so many V.O.D. sets, once it's gone from the source, it's a mortgage payment on the collector's market. Anybody able to share it; much obliged if so. Thank you!

I would be only toooo happy to upload a Horology file for you to have mr anonymous...as you may know Mr VD on demand smd myself don't hit it off. So,i'll upload it....for a limited period only so don't hang about...link will be here in a day or two......and the second volume too if you wait longer.

Jonny, THANK YOU! That would be grand. Oddly enough, box 2 I was able to find over at exy's; links are still active, which made my day. Haven't seen box 3 anywhere, though. Again, THANK YOU so much for the future Horology 1 posting (so excited to listen to it!) and all other excellent sounds on this incredible site. Not hard to love V.O.D. simply for what they've put out/kept alive, but they could certainly do well with a sense of humor about it all; and so I thank you for taking the left-pinky-raised, library-like stuffiness out of it.

Here's the link for Horology,share it far and wide:

Jonny, your kindness seemingly knows no bounds! I thank you again for truly making the music available to those who just want to listen; what a gift!

THX for Horology! Is volume III post-worthy? Great listening here! Thanks for that, and for Horology III if possible!!!