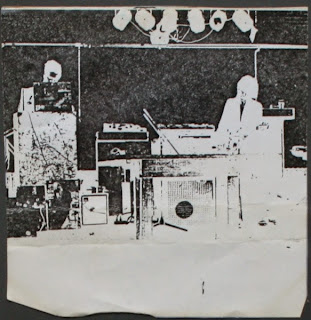 More stuff from the Netherlands. I bet you've all been waiting for that Vovo Kai post haven't you?....Ha!.....I knew it.........No!
Well here it is anyway. If you like Industrial tinged minimal electronics that sound like it was recorded in some public bogs, then this, shamelessly, is for you.
Twenty three untitled nocturnes for distorted bass, distorted organ, distorted synth,and  some groaning into a space echo. All this with the acoustics of a carpet shop.

DOWNLOAD and file under 'experimental' HERE!
Posted by Jonny Zchivago at 22:25

Sooo many boxes ticked - I was going to say 'you had me at...' then realised that would be, er , the entire second and third paras.

You've reminded me of a review of Total Sex by Whitehouse from back when the Susan Lawly CDs came out, saying that "the fact that it sounds like it's been recorded in an empty lavatory only serves to enhance the effect". Might've been Mark Paytress writing in Record Collector. I'm sure WB was delighted by writeups like that one, and by the accompanying Great White Death review noting that it now included "the firey cock song, in all its (morning) glory".

I seem to remember an episode of the Old Grey Whistle test where some long hair was recording his saxophone in the studio Bog (toilet to non-uk citizens).This was the unbelievably shit Supertramp. This is proof that it isn't where you record its what you record.
Hopefully the music they made was flushed down the studio bog where it belongs.

PS, I used to have Total Sex on cassette,even made a mp3 file of it; but they have both gone!?