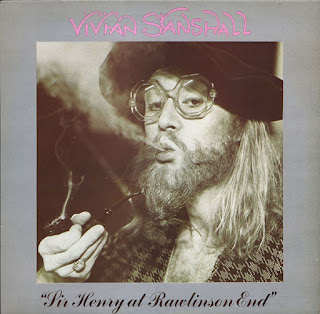 After the terribly annoying 'Ginger John', here we have a rather more eloquent and erudite 'Ginger Geezer',as he called himself, Vivian Stanshall.
No, Vivian wasn't Posh,unlike some of his bandmates in the Bonzo Dog Doo Dah Band....amazingly. I could have sworn he was from the same future leader factories as Peter Gabriel,Boris Johnson and Joe Strummer, but no; he was a cockney from the deepest east end of London. His father forced the children to speak with the plummy accent that we know him for today. Joe Strummer did it the other way round to get acceptance;gone was Joe's well spoken northern somerset public school bully-boy accent,and he became a cockney,overnight...only to let it slip later in life to become a well-spoken chap again. He wasn't the only one to do this in the Punk Rock years. If you listen to the transformation of Sid Vicious's accent from rather well spoken,as captured on the film of the Thames Boat jubillee incident, to the east landan scumbag that we know and love today.
Incredible how the need to 'Better' yourself, takes such divergent paths innit?
This explains Viv's enduring friendship with Keith Moon and Ringo. Three working class oiks playing at being  posh chaps, as I must say, a pastime I have a tendancy to enjoy myself ,rather too much!
Actually, this obsession with playing a camp version of one of the knights of the realm,often dressed up as Nazi's, was a rather spiffingly subversive direction leading to the eventual downfall of the landed classes,who stole their wealth centuries ago.One has to say, that I prefer the old money bastards to the Nouveau Riche cunts who now own everything,and are far worse than the hereditary classes,who had become relatively harmless. I of course, talk of bloated turds such as Philip Greene and Richard Branson,and their despicable Ilk...who now want taxpayers money to bale the fuckers out,after making their staff redundant and stealing their pensions. I live in hope that this mini apocalypse we are experiencing now (the co-vid pandemic thing) can genuinely lead to a new world order.and as Terry Waite Sez..."a great leveller." Year Zero cometh.
Although rather Pythonesque, its a really entertaining and frequently funny saga about a drunken Aristocrat trying to exorcise the ghost of his brother Humbert who accidently killed in a drunken duck-shooting incident whilst escaping trouserless from an illicit tryst. Let's not forget his butler, 'Scrotum, the wrinkled retainer'.
Basically this is Downton Abbey on LSD.

this is simply great ... it's the English end of the Ivor Cutler stick.

"I of course, talk of bloated turds such as Philip Greene and Richard Branson,and their despicable Ilk...who now want taxpayers money to bale the fuckers out,after making their staff redundant and stealing their pensions."

Its no different in the U.S.. We sorry sacks of sheep dip bale out the rich ever few years because its our guilty moral right to live closer to poverty while they throw champagne breakfasts in their West Palm Beach mansions. The home loan "crisis" of 08' bail the banks out, then the auto industry then it was Wall-street those poor helpless investors...this is history repeating itself. Swap out silver spoon feed aristo with wall street billionaire same shit different century!

To my eternal shame I have yet to hear this. Now you've made it possible for me to rectify that. Tugging my forelock in your general direction sire.

Badgerstump - the telly version that you are thinking about was actually a film, with Trevor Howard playing Sir Henry (still available on DVD). If you do track it down, some strong acid would certainly help. My favourite scene takes place in the billiard room, with one of the toffs knocking a few balls around while on horseback in full jousting gear.
I was lucky enough to see Viv Stanshall play in a pub in York, not too long before he died. He was delightfully out there, chipping in with some solos on his baconium - a shapely female clothes dummy leg adapted to take a reed and some kind of horn.

This is one of the best band performances ever or what? BiG GrunT:

@ pete.m ... ah, of course it was "proper" film and yeah, the billiard scene is brilliantly fkd up ... i wish i'd have had the chance to see him live ... anyway, i'm off to track down that dvd

@ mr z ... i had no idea that there was a big grunt. that is utter genius. clearly Vic & Bob nicked a lot of their shtick from Viv.